PARK(ing) Day is an annual, worldwide event that invites city dwellers everywhere to transform metered parking spots into temporary parks for the public good.  In  the 21st century PARK(ing) Day started in San Francisco in 2005.

Parking day occurs for one day a year. But long before this in the first half of the 20th century Parking day was an everyday experience. In this photograph from 1941 we see children gathering in a parking spot, a pushcart in the parking spot to their immediate right and on the sidewalk chairs where  adults would gather to chat. As Park(ing) Day has shown  there is no God-given right for internal combustion engine vehicles to be the only objects that can occupy a parking spot. PARK(ing) Day's curbside parks show that this can be done for a day a year. Park Chelsea intends to show this can be done for 365 days a year.

As the New York City Department of Transportation has converted roadways into seating plazas, we can convert curbside parking spots into curbside parks with REAL grass, flowers. hummingbirds, fireflies,  butterflies, seating  and other park amenities.

The Chelsea Garden Club consists of gardens created by as a side effect of trading car roadway for bike paths. 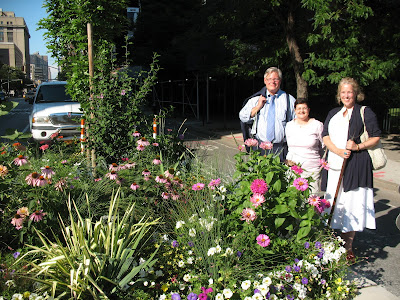 Shown above Sen. Tom Duane, here with Phyllis Waisman and Missy Adams at Luis's pit on 25th and Ninth, has championed the pit gardens and got us the green light to plant in the bike-lane tree pits

The Great Wall of Chelsea 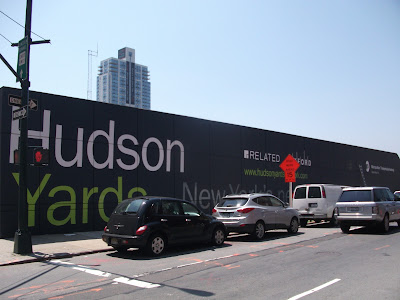 The Great Wall of Chelsea
Surrounding the Hudson yards is a cement curtain that we will refer to as "the Great Wall of Chelsea". It is a dark gray wall with the words Hudson yards, Related management, and Metropolitan Transit Authority, continually repeated around the wall.
As part of Park Chelsea we would like the function of this wall to be changed from merely a cement boundary that encompasses the Hudson yards into a series of artistic murals that will be painted by our local art community. 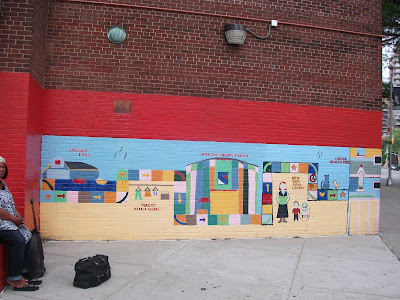 as an example of what can be done here is a mural at PS 11
by turning this wall into a series of murals what will occur is that when viewers of the Highline exit at 30th street rather than being left in the middle of an industrial zone they will be able to continue their walking/viewing experience by following the path of the Great Wall of Chelsea art to where it reaches 34th St .. 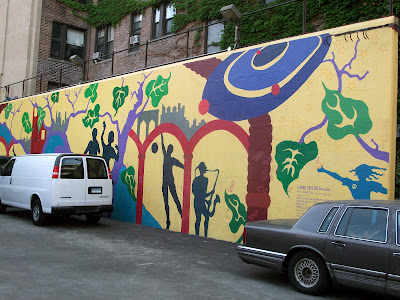 A mural painted on the wall of IS 44 Columbus Ave and 77th St
At 34th St The Great Wall Chelsea Art will continue to 11th Ave. In the future this will also connect to the new 7th Ave subway extension station at 34th St and 11th Ave.
Park Chelsea  has talked with local artists and MTA employees about turning the Great Wall of Chelsea Art into a canvas for our local artist and the idea has been favorably received so far. 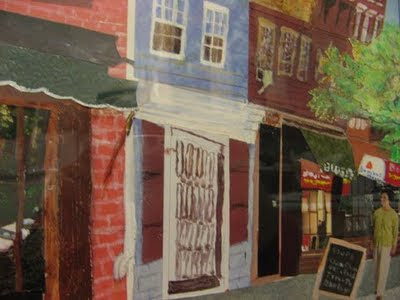 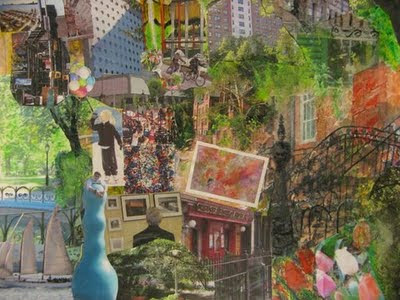 "These are collages I did of Chelsea.  If you get permission to have this
wall painted I could copy these on to the wall...."
-Florence Cohen, Chelsea Resident
Art Bridge a model for the Great Wall of Chelsea Art
In a city constantly under construction (with much of it stalled as a result of the unfortunate downturn in the economy) sidewalk bridging is everywhere. Very rarely, if ever, is the sight of a new shed going up seen as a welcome addition to the neighborhood. Although essential for waterproofing and repair work, sheds visually pollute neighborhoods, blocking light and obstructing walkways while nevertheless forcing residents and passersby alike to accept them as a less-than-ideal part of City Life.

In the late Fall of 2008, having had enough of the nearly 500 linear feet of bridging wrapping around his building, London Terrace resident and ArtBridge Founder, Rodney Durso, decided to do something about it. After the building management gave him the green light, he launched a competition that called for art from local emerging artists to cover the scaffolding, effectively turning a building under construction into an Art Destination.


It worked. Over 500 people attended the exhibition’s Opening Night and the community welcomed the installation. It beautified the streetscape, brought local, national and international media coverage to London Terrace Gardens, and reinforced the sense that the building did care about the quality of life of its tenants.

http://art-bridge.org/installations/new-project-inquiries/property-owner-faq/
Posted by . at 4:34 PM

Park Chelsea's "a seat on every street campaign"  kicked off with its first "Hospitality Seats" outreach at the Penn South fleamarket between 26th St. and eighth and 9th Ave on June 4. 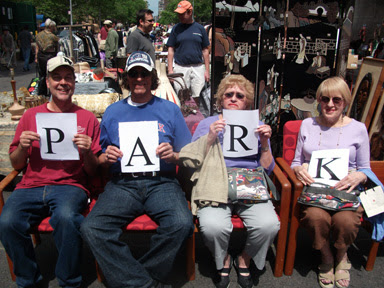 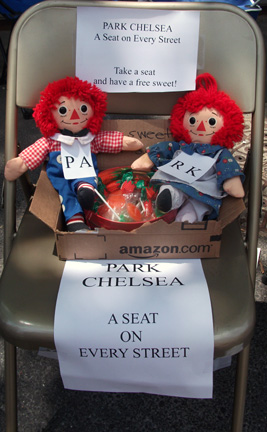 "After addressing Community Board 4 public meetings, garnering petitions and letters of support from neighbors, schools and businesses, having meetings with local officials and their staffs — and holding a well-attended rally — the Friends of 20th Street Park have finally received the big boost of support they were hoping for. In her strongest words to date, City Council Speaker Christine Quinn has pledged to work aggressively to find a solution to bring both a park and affordable housing to the east Chelsea neighborhood she represents."

The Highline is Chelsea's most well known Sky Park. but Chelsea has also has a number of other Sky Parks in buildings not open to the public.

A green roof is a roof of a building that is partially or completely covered with vegetation and a growing medium, planted over a waterproofing membrane. if you add seating and other amenities to a green roof you get a Sky Park.  In 2009 Chelseas' Morgan postal facility on 29th St and 9th Ave installed New York City's first green roof which also just so happens to  function as a Sky Park. 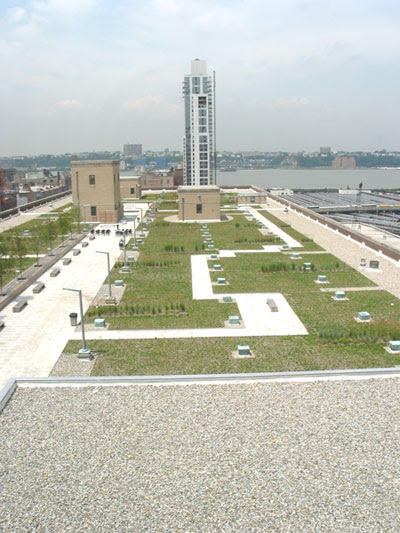 The U.S. Postal Service celebrated another example of its environmental leadership as it dedicated its first and New York City’s largest green roof high atop the Morgan mail processing facility.
At nearly 2.5 acres, and safely perched seven stories above the city, the Morgan green roof offers a spectacular panoramic view of midtown Manhattan and the northern New Jersey shore. Its 14 orange-hued Ipe Brazilian wood benches are made from lumber certified sustainable by the Forest Stewardship Council. Native plants and trees include Calamagrostis, a lush, maintenance-free grass.

WLA: Do you think your green roof project is the tipping point for green roofs or are they now seen as essential in city living?
Elizabeth: The project is a tipping point in terms of its actual size – big roof areas provide the opportunity to differently inspire the imagination. Typically, to justify the added cost of this type of installation, a green roof should be “useful,” sufficiently (and significantly) offsetting stormwater runoff, or mitigating heat island effect, or adding to the R value of insulation to reduce heating and cooling costs, to eventually offset the investment; in another context a roof of this size could be a productive urban farm – an idea that is no longer far-fetched in the general public’s mind. Except for farming idea, the Morgan P&D Center project was conceived in part to do all those things; however, in its vastness it is also poetic.

WLA: Are you currently designing any other green roof projects?
Elizabeth: This was one of seven projects commissioned in the past two years, including two for hospitals under modernization, and two providing open space for affordable housing; each one has been entirely different from the others. The 2+ acre roof of Morgan P&D Center is the largest in our portfolio; when completed, the green roofs of the WE ACT Environmental Justice Center, will be the smallest in size, at 350 square feet. 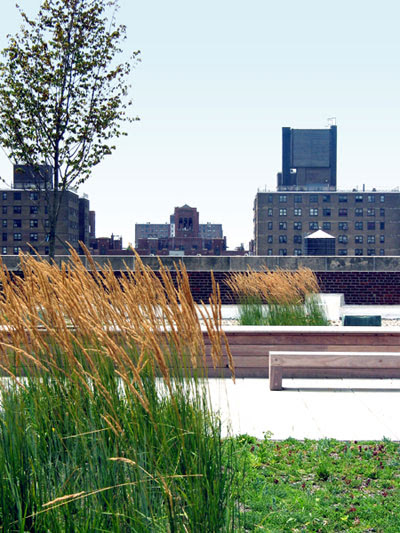 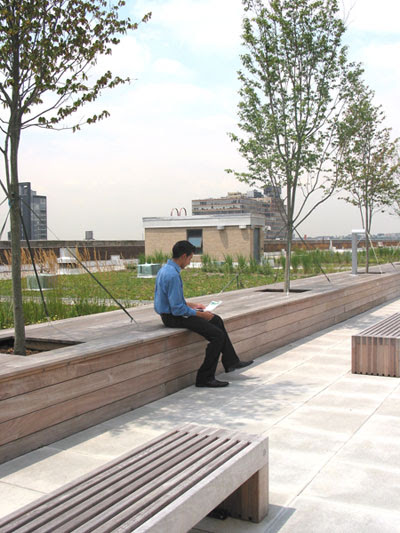 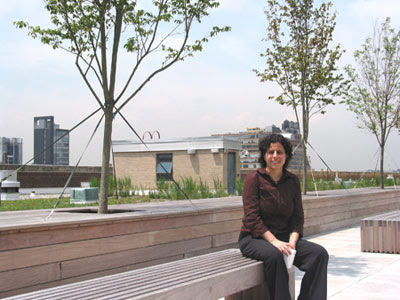 ...To encourage these benefits, incentives are sometimes offered. The developer of Manhattan's Chelsea Residence will receive a check for $55,000 from the New York State Energy Research and Development Authority for using green roofs, thermally efficient insulation and energy-efficient windows, according to Richard Vitto, the project's architect.

Incentives are necessary since, in the short run, green roofs are more expensive to construct than standard-issue roofing. "You have to convince policymakers that green roofs deliver tangible benefits to the public that justify the investment," says Peck.

Those who experience green roofs are easier to convince--any new patch of greenery gets raves from urban dwellers enveloped by concrete and steel. The two green roofs on the Chelsea Residence, including a vegetable plot maintained by the tenants, are intended to make up for the complete lack of open space in the area. "Part of the reason you create green roofs is that they're good for the environment," says Vitto, "but it's the human aspect people get excited about." Other projects on the Earth Pledge roster include low-income apartment houses in the green-deficient South Bronx and Harlem.

Concludes Peck, "It's astounding how many benefits you can generate with green roofs. You can create a sense of community, keep people off the streets, provide social assistance and help the ecology."