There are quite a number of groups in charge of Chelsea's public spaces. These groups often function to optomize for their own needs rather then the greater needs of the community. Below you'll see Capital space a partnership in Wahington DC that works out shared strategies to meet the needs of DC's parks. We need a similar  body  in Chelsea. Our Community board Parks comittee might be the best place for this function to reside.

CapitalSpace is a partnership initiative of the National Capital Planning Commission, the National Park Service, and the District of Columbia to develop shared strategies for working together on parks and open space throughout Washington, D.C., particularly in the city’s neighborhoods. The CapitalSpace plan represents the first time in almost 40 years that a comprehensive analysis of all of Washington’s parks and open spaces has been undertaken.

The Commission adopted the final CapitalSpace Plan on April 1, 2010. Commission staff continues to work with partnering agencies to implement the plan’s recommendations. Civic leaders, organizations, and individuals helped shape the plan through comments and opinions shared during the plan's development.

The CapitalSpace partners envision a beautiful, high-quality,and unified park system for the nation’s capital that:

Everyday activities as Good as gym

If heading to the gym fills you with dread—and any number of “not today” excuses—you don’t necessarily have to suck it up and just do it. That’s because a new study shows that everyday activities can be just as beneficial as hitting the treadmill or doing your circuit training routine—minus the cash, sweat and annoying machine hoggers.


Researchers from Oregon State University evaluated a federal survey of more than 6,000 American adults and their physical activity levels. All participants wore accelerometers to track their movement throughout the day. Part of the group took part in structured gym workouts, while the others simply stayed active throughout the day by doing simple chores around the house and running errands. After four consecutive days of wearing the device for at least 10 hours a day, the results were surprising: Small bouts of activity—even just one- and two-minute increments totaling 30 minutes per day—were deemed just as beneficial as longer bouts of exercise at the gym or elsewhere.

Cardinal and his co-author, Paul Loprinzi, Ph.D., assistant professor at Bellarmine University in Louisville, KY, also found that 43 percent of those who participated in the "short bouts" of exercise met the 30-minute-a-day physical activity guideline. Meanwhile, less than 10 percent of traditional exercisers did (too many excuses for blowing off that workout, perhaps?).

"The thing that surprised me was that current guidelines state exercise needs to be 10 minutes or longer at a time, but we found that bouts as short as one to two minutes were equally as good-as long as they added up to 30 minutes throughout the day." link 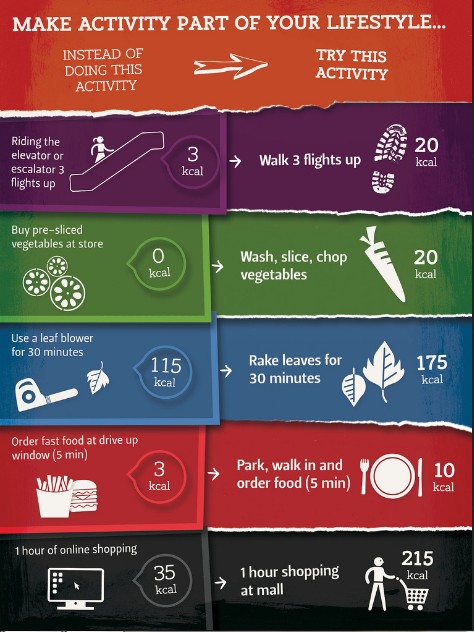 . “Making physical activity a way of life is more cost-effective than an expensive gym membership. You may be more likely to stick with it, and over the long term, you’ll be healthier, more mobile and just feel better all around.”

Newswise — New research at Oregon State University suggests the health benefits of small amounts of activity – even as small as one- and two-minute increments that add up to 30 minutes per day – can be just as beneficial as longer bouts of physical exercise achieved by a trip to the gym.
The nationally representative study of more than 6,000 American adults shows that an active lifestyle approach, as opposed to structured exercise, may be just as beneficial in improving health outcomes, including preventing metabolic syndrome, high blood pressure, and high cholesterol.
“Our results suggest that engaging in an active lifestyle approach, compared to a structured exercise approach, may be just as beneficial in improving various health outcomes,” said Paul Loprinzi, lead author of the study. “We encourage people to seek out opportunities to be active when the choice is available. For example, rather than sitting while talking on the phone, use this opportunity to get in some activity by pacing around while talking.”
Perhaps just as importantly, the researchers found that 43 percent of those who participated in the “short bouts” of exercise met physical activity guidelines of 30 minutes day. In comparison, less than 10 percent of those in the longer exercise bouts met those federal guidelines for exercise.
Loprinzi, who is an assistant professor at Bellarmine University, conducted the research as a doctoral student working in the lab of Brad Cardinal at Oregon State University. Cardinal, a professor of exercise and sport science, is co-author of the study, which is in the current issue of the American Journal of Health Promotion.
“You hear that less than 10 percent of Americans exercise and it gives the perception that people are lazy,” Cardinal said. “Our research shows that more than 40 percent of adults achieved the exercise guidelines, by making movement a way of life.”
Cardinal, who has studied the “lifestyle exercise” model for more than 20 years, said one of the most common barriers people cite to getting enough exercise is lack of time. He said the results of this study are promising, and show that simply building movement into everyday activities can have meaningful health benefits.
“This is a more natural way to exercise, just to walk more and move around a bit more,” Cardinal said. “We are designed by nature as beings who are supposed to move. People get it in their minds, if I don’t get that 30 minutes, I might as well not exercise at all. Our results really challenge that perception and give people meaningful, realistic options for meeting the physical activity guidelines.”
For example, Cardinal said instead of driving half a mile, try biking or walking the same distance; instead of using a riding lawn mower, use a push lawn mower. Instead of sitting through TV commercials, try doing some sit-ups, push-ups, or jumping jacks during the commercial breaks; and instead of sitting and being a spectator at a child's sporting event, try walking around during the halftime break.
The researchers said the participants in this study wore accelerometers, which is an objective tool to measure physical activity. Those who participated in the short bouts of activity could be moving as few as one or two minutes at a time. The people in the “short bouts” group had positive results in areas such as blood pressure, cholesterol, metabolic syndrome, and waist circumference.
For instance, the study showed those in the shorter exercise group who met physical activity guidelines had an 89 percent chance of not having metabolic syndrome, compared to 87 percent for those meeting guidelines using the structured exercise approach.
Loprinzi said the one area where small bursts of activity did not seem to equal the benefits of longer, sustained exercise was in Body Mass Index, or BMI. However, the researchers cautioned that these findings do not necessarily mean that short bouts of activity do not help with weight loss, especially since they did find a benefit on weight circumference.
“There are inherent limitations in BMI as a surrogate measure of fat and health in general,” Cardinal said. “People can still be ‘fit’ and ‘fat.’”
The researchers emphasized that for health benefits, people should seek out opportunities to be physically active.
“In our society, you will always be presented with things that entice you to sit or be less active because of technology, like using a leaf blower instead of a rake,” Cardinal said. “Making physical activity a way of life is more cost-effective than an expensive gym membership. You may be more likely to stick with it, and over the long term, you’ll be healthier, more mobile and just feel better all around.”
link