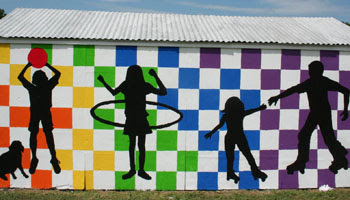 PDF Instructions for painting a mural 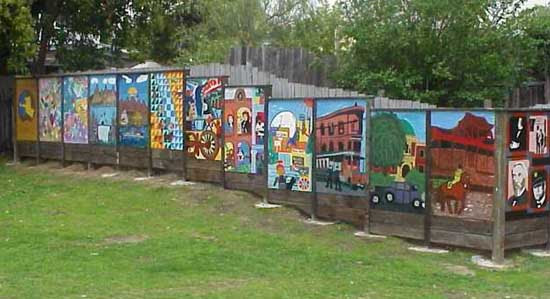 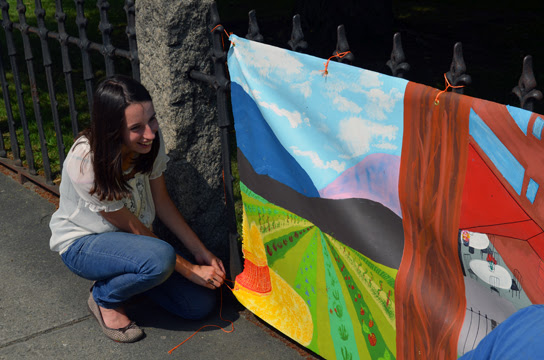 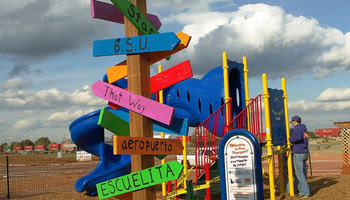 Forget about smart cities, Playable City ideas – like Bristol’s water slide or its temporary play streets – are a human response to the coldness and anonymity of the urban environment


During the past year in Bristol you could have plunged down a 300ft water slide on one of the city’s main shopping streets, had a text message conversation with a lamppost, let your children play outside during a temporary street closure, or played a zombie chase game around the city centre.
All good fun, you might or might not think. But the people behind these and other similar projects believe they add up to much more than a good laugh. Next week, many of them are meeting for a conference at Bristol’s Watershed on Making the City Playable.
Although their work is in many ways disparate, three key ideas bring them together. First, that cities create problems of living that can only be addressed by collective action. Second, the sense that the well-being of communities cannot be left to local authorities; citizens need to take control of their own surroundings. Third, an optimism that we can do more than just tackle problems one by one. By encouraging public activities that actively bring joy, we can create a happier, more cohesive urban future.
The Playable City movement can be seen as a creative response to the coldness and anonymity of the urban environment, which technology threatens to make even worse. Conference organiser Clare Reddington told me of her despair over visions of “smart cities” where technology aims to remove all the friction from our movements, guiding us by smart phone to exactly where we want to be. For Reddington, this is “over-planned” and all about “how fast you can get from one place to another”. It’s also a vision tailored for tech geeks rather than the whole community. She recalls a workshop in Europe’s then Capital of Culture – Guimarães in Portugal – in which the older people feared being left increasingly alone and cut off in a world in which “everything is going to be mediated by a screen”.


Play might appear to be a rather frivolous response to this, but in its broad sense it simply means any kind of enjoyable activity which is not a functional means to an end. In cities, people are often completely wrapped up in what they have to do, where they need to get to next. It is no accident that many film-makers and artists have represented cities as machines in which people scurry around like lab rats. Play is about interrupting the utilitarian efficiency of the urban environment and getting people to think about what actually makes us human.
This is not an idea confined to quirky eccentrics in the south west of England. The playable city meme has travelled to Sweden, Texas, Japan and China. There was also a recent playable city conference in Brazil, in which urban planner and policy-maker Claudio Marinho participated. He told me that for him the notion of the playable city arises from the need for “an affectionate re-appropriation of public places to get back city-centre life from our bunker-high-rise isolation.” In Brazil, he sees high-rise apartments behind walls “creating non-place neighbourhoods”, a place being a “space with meaning, history, narratives”.
Similarly, Usman Haque’s interest in playable cities is “motivated by exploring how people relate to each other and their spaces around them; how they express their agency and take ownership of their environments, and the structures of participation through which they collaborate with neighbours to take ownership of their environments collectively.” For instance, his permanent installation in Bradford’s City Park sees fountains and lights respond to the movement of the people around the space. By trial and error they can learn how to choreograph them.
Only by giving citizens the ability to creatively shape their own environment can their agency and ownership develop. “I’m interested in how the designer of a system can best support ordinary people’s creativity,” says Haque, “by being neither too prescriptive, and therefore unable to accommodate the unplanned, nor too unspecified, and therefore giving no firm take-off points, for people to contribute meaningfully.”


For the playable city to thrive, it requires cooperation from local authorities, something that Reddington says is very forthcoming in Bristol which “has a unique set of permission structures that enables this stuff to happy really easily”. There are very clear incentives for councils to come on board. Since Rome, legislators have acknowledged that a thriving metropolis requires bread and circuses, more than just the bare essentials. Many of the playable city ideas provide very cheap ways of doing this.
Artist Luke Jerram’s “park and slide” water slide was crowdfunded, so the council only needed to close the street. His similarly low-budget “Play Me, I’m Yours” project has seen 1,300 pianos installed in public spaces in 45 cities around the world.
All councils have to do to allow street play is to create a statutory instrument like Bristol’s Temporary Play Street Order and make it easy to obtain. A straightforward form needs to be completed six weeks before the first closure, and roads can be closed as often as once a week for a maximum of three hours, as long as residents are allowed vehicular access. Once granted, a TPS order is valid for 12 months. Volunteer parents take care of the rest.
Shadowing, the winner of the 2014 Playable City award, has a budget of £30,000, which is not a lot for a city-wide arts initiative. From 11 September Jonathan Chomko and Matthew Rosier’s creation “will give memory to eight of Bristol’s city lights, enabling them to record and play back the shadows of those who pass underneath”.
Many of these projects might sound like rather contrived and artificial ways of dealing with the problems of atomised urban living. That is for a good reason. Cities are in a sense artificial, and if they have a natural form at all, it is a cold and alienating one. It requires self-conscious, artificial interventions to disrupt this.


There is, however, nothing unnatural about the objective, particularly when it affects children. “Over the past few generations, the idea of the whole city being a child’s playground has been lost and outside play is now generally restricted to designated times and places and managed by adults,” says Playing Out’s director Alice Ferguson. “The ability to ‘play out’ independently, to discover one’s own city and develop skills, resilience and self-reliance cannot be replaced by this type of ‘managed’ play.”
It’s hard to object to anything which is, as Reddington says, about “connection, community and people”, which in Marinho’s words aims to “make cities new and renewed with landscape (urban memories), texture (human scale) and affection (place appropriation).” But does it really work? Objective assessment is inherently difficult, since it is not as though the desired outcomes are easily quantifiable. Nonetheless, Watershed is working with the University of the West of England to get a PhD researcher to work on how to qualitatively assess the benefits of playable projects.
Some ideas are bound to be better than others. But the value of the playable city idea can easily be seen if it is placed in its context, as very much part of a broader movement aimed at softening the edges of the urban environment and engaging people more with each other and their surroundings. There are now around 50 “incredible edible” towns and cities in Britain, which grow fruit and vegetables in public spaces for everyone to share. Bristol-based Playing Out is a pivotal member of a community of groups nationwide which strive to open up roads to pedestrians. All of these initiatives aim to give a more human, friendly face to our concrete and tarmac world. Behind them all is a simple maxim that rings true: the city that plays together, stays together.