“People need green open spaces to go; when they are close they use them. But if the greens are more than 3 minutes away, the distance overwhelms the need… This problem can only be solved if hundreds of small parks-or greens are scattered so widely...that every household...is within three minutes walk of the nearest one.”  -
So how do we create hundreds of small parks in Manhattan? It can't be done through our  current centralized  parks  building model. First off city parks cost million of dollars to create. A recent NY Post article showed several playgrounds being build at a cost of $3.8 million and up.   Just renovating the Matthews Palmer playground in Hell's Kitchen will cost $1.8 million dollars.    And even if we had the funds there simply isn't enough city owned open space in Manhattan to do so.   However scores   of "3 minute  parks" can be created in a community by using a variety of alternative open space creation techniques.

Creating Open Space where no special site is required

Standardized street furniture can be placed on sidewalks and in car parking spot.


Streets and Sidewalks
Streets make up approximately 25% of the City's land area and yet, outside of parks there are few places to sit, rest, socialize, and to enjoy public life. NYC DOT

Here's how to reclaim streets and sidewalks as parkland... 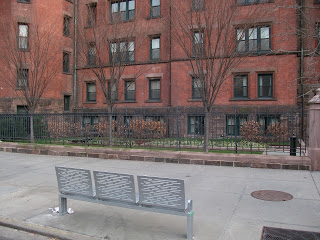 The Desmond Tutu center garden  is private property generally open to hotel guests only. Adding a bench in front of Desmond Tu Tu Garden creates a spot on public property to relax and enjoy a view of the private garden.


"They (seniors)care about benches, trees, gardens and open space closest to where they live. Big parks are for occasional visits in most cases."-Creating a Age-Friendly New York, One Neighborhood at a Time


Through NYC's Citybench program Chelsea has  added 18 benches in locations that are useful to our seniors. 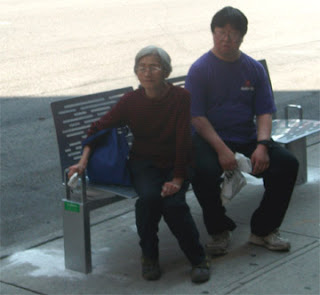 As  I walked past the new Moonstruck diner on 9th Ave,  I noticed an older woman walking in the opposite direction. I thought "here's a person that can use this bench" Sure enough she and her companion had a seat there.


Parklets: Reclaiming  Parking Spots as Parks
A parklet is a small space serving as an extension of the sidewalk to provide amenities and green space for people using the street...Parklets are intended for people. Parklets offer a place to stop, to sit, and to rest while taking in the activities of the street. Wikipedia 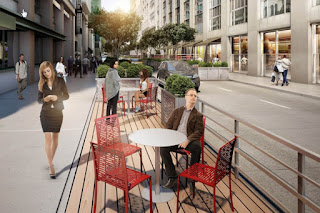 This parklet that will be placed on 41st Between 6th and 7th Avenues, transforms several parking spots into outdoor seating. At 30 W 22rd Street, the Van Alen Institute has proposed a parklet in front of their bookstore.This has been approved and will hopefully be in operation Spring 2014 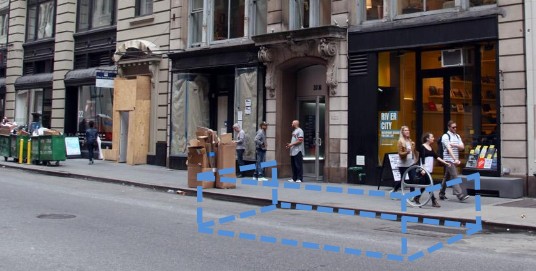 It is  the NYC's s first site-specific  parklet that is not in front of a restaurant.

... we hope to advance the Street Seat program by partnering with DOT to use our installation as a prototype to help pioneer innovative strategies for engaging the public, while reducing operating expenses and simplifying installation for future Street Seat sponsors—and elevate the profile of this exciting city initiative. link

Along with the recent  installation of 10  Citibenches (white dots below) installing more parklets like the Van Alen Parklet  (red pin  below)are a key element in the creation of an Age-friendly Midtown South. 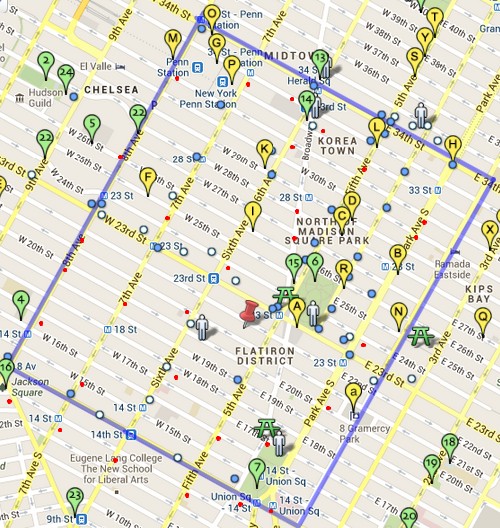 Los Angeles has installed the nations first active recreation parklet. It includes foosball,  fitness equipmen and seat swings.If the first parklets that LA has installed work out, the city expects to install hundreds of them.

NYC  now has just  installed over  300  hundred  "unintentional" parklets. Here's how to turn them into intentional parklets...


Actually our  Citibike stations are currently being shared in an "off-label" fashion. Currently the Citibike docks are being used as a place to lean on. And people are sitting on the bikes. These are excellent "off label" uses of the   Citibike stations. However these "off label" uses are not optimal   for the comfort of the people sitting/leaning. And these off label uses are not safe for older people. 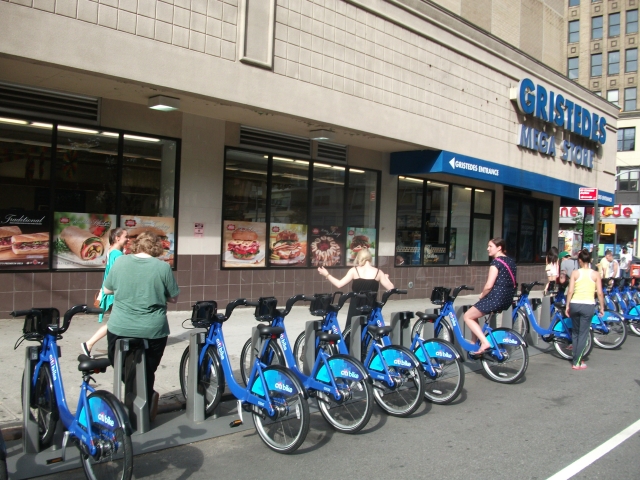 Two leaners and one sitter


Here's a way to add seating to the docks that is optimum for people... 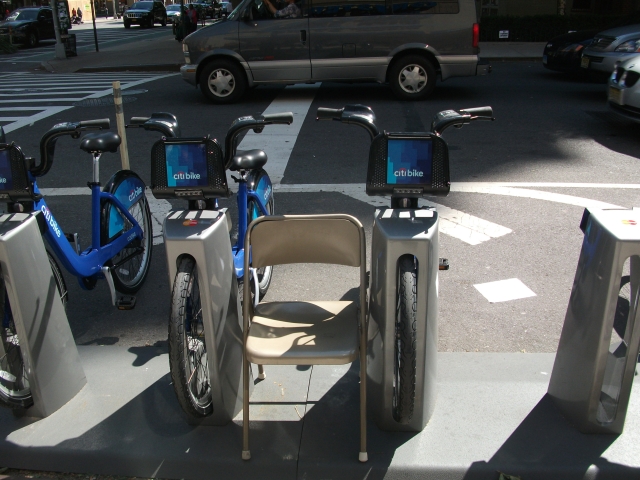 In between the bike's there's actually enough room to place a real seat as I did here. 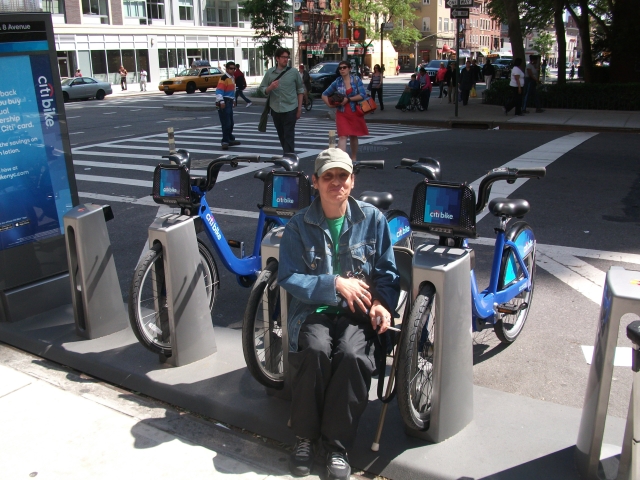 and here's a woman sitting in the space

Adding seating to Bikeshare station would initially create up to 300 street seats locations., 600 when the system reaches its next  expansion. And possibly thousands if the system is expanded throughout the 5 boroughs.

Additionally beyond just seating other functionality   could be added in the space between the docks.  For examples of additional uses  see:
Getting to the Three Minute Park Part 2: Adding new functionality to Citybike Docking Stations


Parklets and sidewalk park benches can be implemented  almost anywhere, quickly, and at at minimal cost.   But they have limitations of capacity and functions that they are able to offer. To meet those needs a host of  site specific building blocks are available. 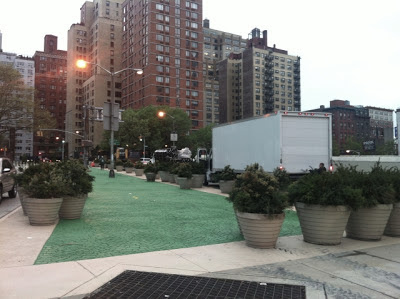 Most of Chelsea is on the grid system and has very few locations that can be transformed into plazas. 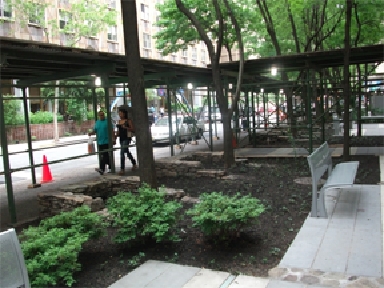 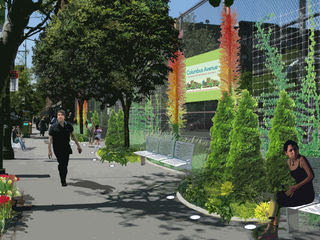 
Here's a  dead avenue block in Hell's Kitchen  on 39th St and 10th Ave  that has potential for a sidewalk park. 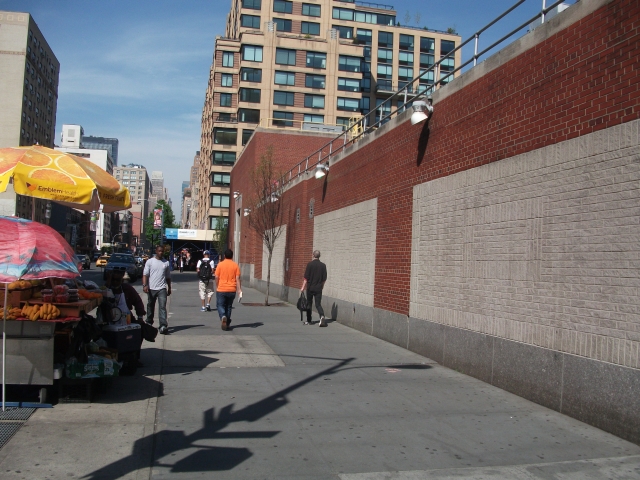 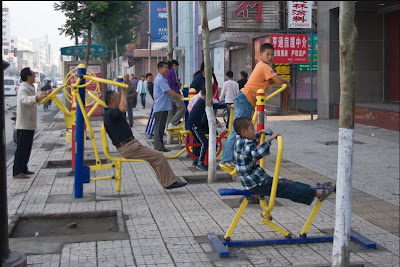 The sidewalk shown here is wider than our sidewalks. What that means is that the types of  of active recreation equipment we could install would need to be more compact then those used in China.

The Highline may be the worlds best known SkyParks. there are other ways to create parks up in the Sky. 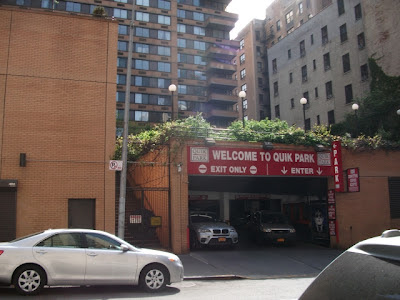 At the Columbus Condominium the Lotus Garden is on the roof of the garage parking. It is open to garden members all the time, and the public on Sunday afternoons. 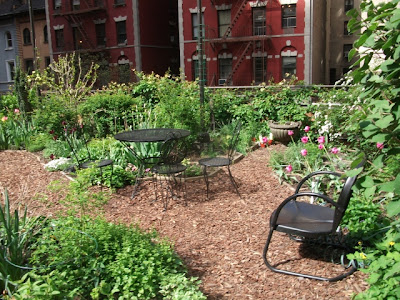 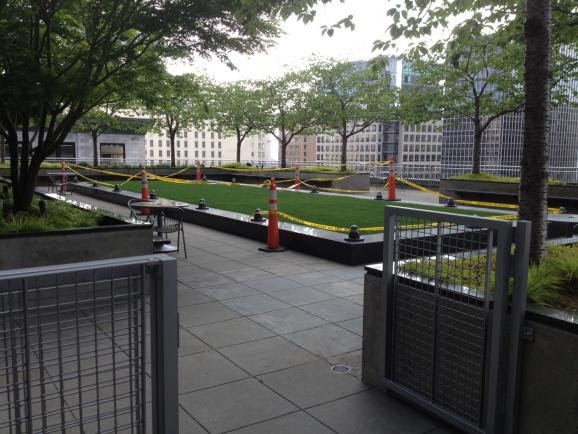 How about we start building  affordable housing with PUBLIC roof  open space  access. Access doesn't have to be for everyone. If a playground is built on a rooftop, access would be for kids and their parents only. If a community garden, it would be for  people who maintain the garden, plus limited access for others.

This is a map of all the Public  Indoor spaces in and around Chelsea  that are open to everyone, and cost nothing to use. .  They are all libraries. 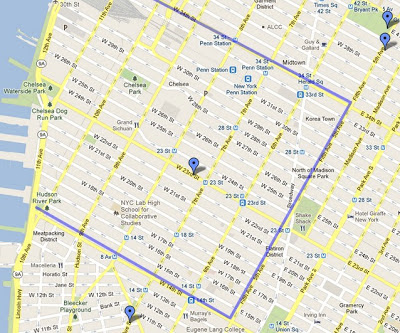 Under the Greenstreets program, Parks has converted thousands of unused concrete and striped islands formed by the city’s intersecting streets into leafy, ‘pint-sized’ parks.A lot of  NYC Greenstreets don't have benches here's one that has had benches 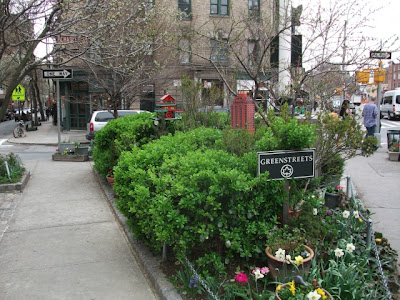 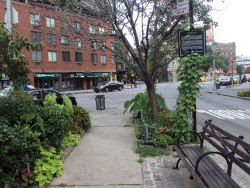 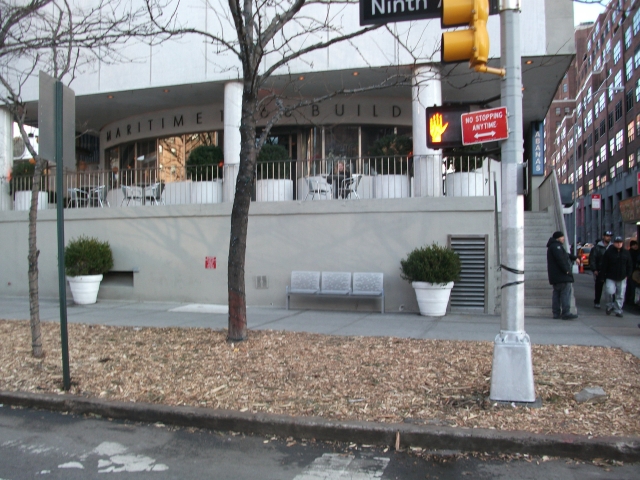 This Greenstreets location had no seating, I requested a Citybench be placed here. Now we have seating and free Wi-Fi access at this spot  . Now it could use more greenery. I could see this spot transformed into a Community garden worked on by either the students at the School of Visual Arts on this block, and/or workers in the Google building on the next block. 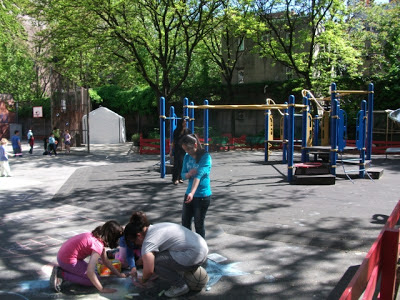 PS 11 in Chelsea was rented on weekends to a Church group. I would see church members play basketball there.  Hundreds of schoolyards  are in the Schoolyards into Playgrounds program. This yard is not in the program. why not?  Alternatively if the school was rented to a church, I see no reason that  the PS11 schoolyard can't be rented  to the city as a playground after school and on weekends.


Prior to 1966 the PS11 schoolyard was the location of private housing.  In arguing for the razing of the houses the schools principal Mr Goldberg  said "the community too needs a park area" There are two areas in PS 11 that can become public parks, one of which had been promised to be so almost 50 years ago. 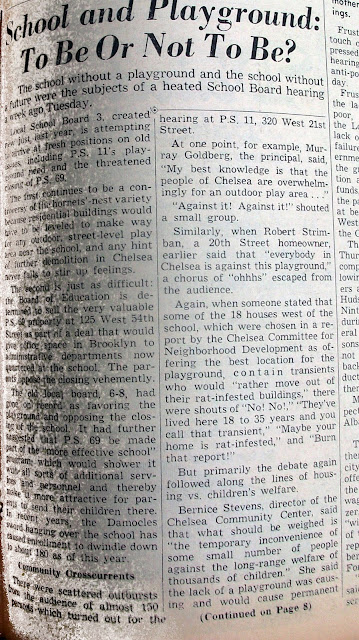 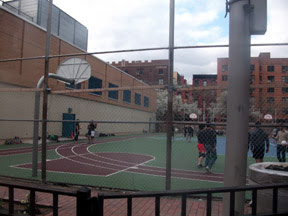 The Museum Lab School has just gotten a active recreation park renovation. Looking at similar schoolyard renovation contracts I estimate this renovation cost well over a million dollars. On weekends it is rented to private groups. How about instead  renting it to the city on weekends  to keep it open for the community, rather then a private group. 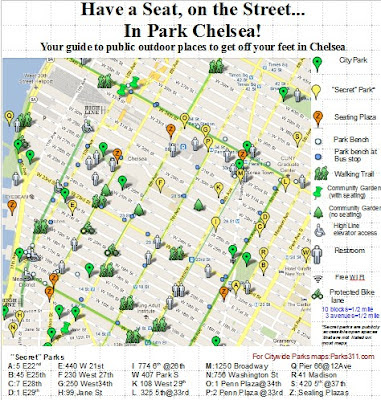 2012 ParkChelsea Map reveals Chelsea's “Secret Parks”
“While researching our 2012 map update we located a veritable treasure trove of open space opportunities that we realized most Chelsea residents had no idea existed. “ says Arnold Bob, better known as Ranger Bob, Park Chelsea’s Parks Commissioner. “ Most of these spaces are part of the NYC Privately Owned Public Space (POPS) program, where building owners are given zoning variances in return for creating public spaces. However, several factors have conspired to make these spaces relatively invisible to their intended users. 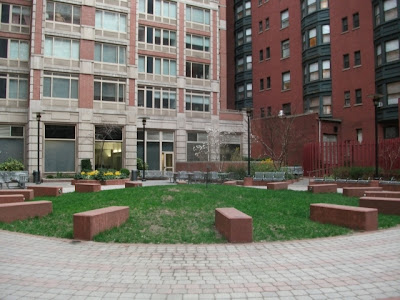 Madison Belvedere, Privately owned public space 28th St between 5th and Madison  Ave.
In a neighborhood with little green space this POPS is barely used.I talked with some black car drivers who were standing on the street in front of it. When asked why they didn't use it they said because it was private space. There is a sign saying that it is a public space,but it's possible most people don't notice it. 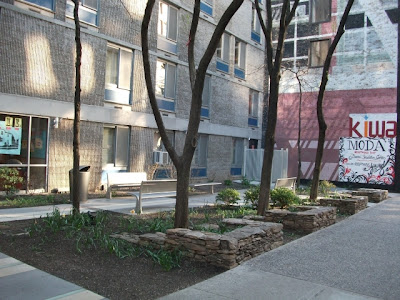 Upon first being shown the 2012 ParkChelsea map, one Chelsea senior noted that for years she would be coming home from shopping with heavy bags, she would see the listed area(above)  , but thinking it was private property, just walk past it. Now she knows it is a public open space where she can stop and rest on her way home.

In a study on  the upper east side it was found that of 76 POPS,  65 lacked explanatory signs telling the public about their right to use the space. link 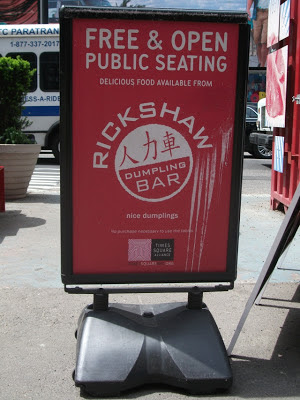 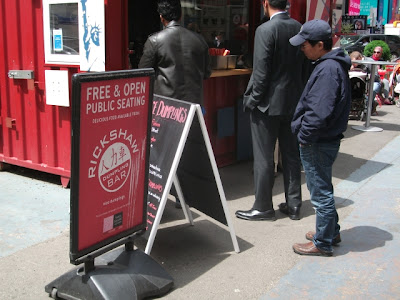 POPS owners cannot be made to add signage revealing the public nature of their spaces, however it is possible for the city to place signs as the above on the streets in front of these properties.
See Community advertising