Theft, Breakage.  Liability
-“Life is trouble. Only death is not"- Zorba the Greek

When talking to a librarian about Libraries-parks partnerships, she brought up good questions about theft, breakage and liability. Here are some thoughts....


Theft
I surveyed  a number of librarians who lend recreation equipment  about the issue and they did not find this a worrisome issue.

I talked to  a branch librarian about stolen  books/DVD's , she said when they do branch inventory they find A LOT of items  have gone missing.  It's part of the cost of running a library.

There are ways to minimize theft.For instance,

-The Mc Arthur Library in Biddlesford Maine, does not leave recreation equipment out, they leave laminated pictures of the equipment out. You go to the desk with the picture and they give you the item.

I hope locker access can be made available foe everyone without issues. In locations where there are "issues", locker access might be limited to special needs .

Instead of benches that are not comfortable or social, Bryant Park in NYC puts out moveable tables and chairs. Unlike the benches, these get stolen. Their philosophy on how to deal with this problem I feel is equally valid  for libraries...

'As Bryant Park's Barth sees it, movable seating should not be viewed as a fixed asset like a statue or a park bench, but instead as a commodity such as garden mulch or toilet paper that must be regularly restocked. "These chairs increase the social life of the park," Barth says. "You can't quantify that financially." '  link

"We purchased video games and within one month, 80% were stolen." link

I know of other libraries who loan video games I suspect they are not having 80% stolen. The solution is not to stop offering video games, rather to learn from the libraries that aren't getting 80% stolen how they minimize theft.

Whatever you call these chair nappings, there are subtle ways to prevent them. When Denver first put out sturdy green chairs with comfortable arm rests, thieves made off with 80 percent of them within 18 months. "They may have fit too nicely in a back yard," says John Desmond, who works for the Downtown Denver Partnership, a business improvement district. Recently, the Partnership replaced those chairs with ones painted either yellow or purple. They don't have armrests and people are likely to be ready to move on after about a half-hour. "We want them to be comfortable enough to sit in for a short while," Desmond says. "At the same time, we don't want them to be so comfortable that people take them home with them."
A NYC Park recreation center loans equipment with security being leaving your Rec Center ID card. Members give their card as security then leave with a $100 basketball, and go to another center to buy a replacement card for $5. The Rec Center  security system is not robust enough to loan items. The New York Public Library will not allow you to borrow any more items at any branch if you have over $15.  in fines. The library system has penalties  that are more likely to deter theft.  .

From Ann Arbor District Library, the answer on how they deal with non return of equipment was...

It's no different than any other library materials. Patrons are responsible for the items they've checked out and will be fined, then billed, for overdue items.  Patrons with a fine balance above $10 cannot check out materials, and accounts over $40 and 120 days overdue are sent to a collection agency.

Libraries  already have theft issues,  books and DVD's get stolen from libraries  on a regular basis. Notebook computers are stored in my local library in a Notebook cabinet that is behind the desk, and can be locked. If theft of recreation equipment is a problem,rather then keep this material in open stacks  perhaps libraries can keep this material in more secure locations.

I talked with Canadian Sports for Life an organization that created sports  kits filled with items  like basketballs, volley vballs  hula hoops  and... Rubber Chickens (yah!!!!)  that were donated to organizations to lend to people in the community. Asking why none of the organizations lending the equipment were libraries I was told:
- the kits contained an awful lot of items and the library worried they wouldn't all be returned.Good point. I suggested a solution to this was, rather then a library lending a bag filled with dozens of sporting items, to lend each item separately.

" Each year in the United States, emergency departments treat more than 200,000 children ages 14 and younger for playground-related injuries" (Tinsworth 2001).  link

I suspect that there are very few if any  book related injuries. So offering recreation equipment opens libraries to a new set of liability dynamics.

Here's how one parks department deals with the liability  issue

Marshalltown Parks and Recreation loans portable  sports equipment such as frisbees, horseshoes, bocce balls,parachutes  and golf clubs. . To loan the equipment you must sign a form that states the following 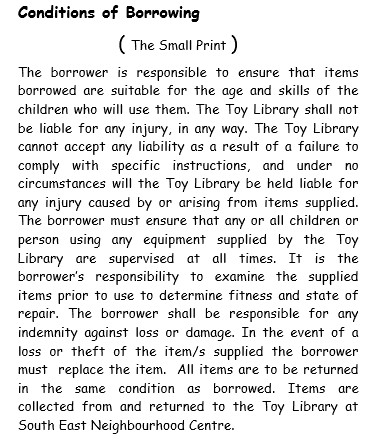 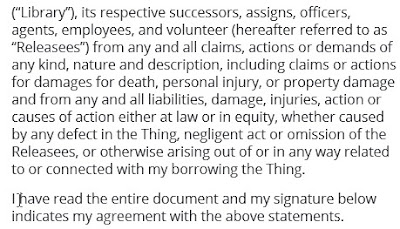 -Recreation equipment collection can  be chosen to minimize loan of possibly  dangerous objects. One librarian told me that he decided not to offer bow and arrow sets because of the liability issue. Alternatively have people sign liability waivers for dangerous objects.   Kids want to skateboard,  it is a dangerous activity. To allow kids to do this activity, and not have to be sued, parks have several liability  waiver options. 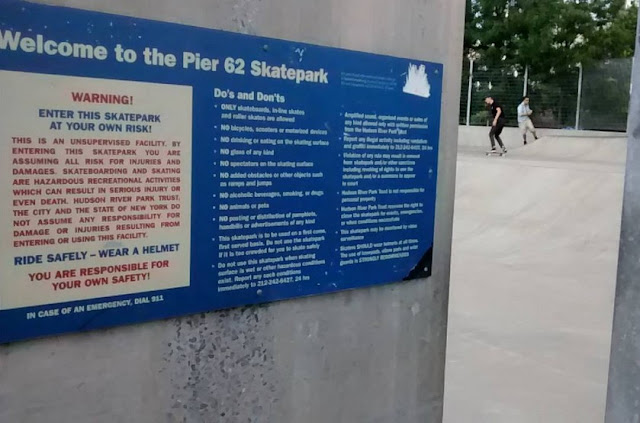 A large sign at the facility has a liability waiver

This is an unsupervised facility.
Enter the skatepark at your own risk.
By entering the skatepark you are assuming all risk for injuries and damages. Skateboarding and skating are hazardous recreational activities which can result in serious injury or even death. Hudson River Park Trust, the City and the State of New York do not assume any responsibility for damage or injuries resulting from entering or using this facility.


Placard Waivers
In instances where recreation equipment is loaned by handing your library card along with  a laminated placard to the librarian, placing the liability waiver statement on the front of the placard might work as a liability waiver  Contact your lawyer to see if this is acceptable in your state.

Toy Library insurance has been specifically designed for organisations which lend or hire toys, play equipment and safety equipment to pre-school playgroups, parent and toddler groups, creches and similar groups.
Premiums for ToyLibrary insurance start at £180 depending on the level of cover you require.
- See more at: https://www.mortonmichel.com/ToyLibraries/#sthash.3qKrNdC4.dpuf

Toy Library insurance has been specifically designed for organizations which lend or hire toys, play equipment and safety equipment to pre-school playgroups, parent and toddler groups, creches and similar groups.

Premiums for ToyLibrary insurance start at £180 depending on the level of cover you require. link