Maine Library-Maine Park
“Our Library checks out basketballs to be used on the courts near the library.  We also have frisbees, jump ropes and hacky sacks available to borrow. The balls have been replaced many times through the years and have resulted in much good will with the kids after school. When they (the kids!) start bouncing off the walls, we suggest they bounce a basketball instead. We don’t require a card, just something of value like a backpack, instrument, cell phone, laptop. This is never a problem because the kids are only too happy to off load their stuff and let us keep an eye on it.”  link


West Torrance Library, Australia
We are lucky that we have a park right outside our windows. Staff have been known to tell a bunch of rowdy kids to take a ball, go out to the park and work off their excess energy before they come back inside and sometimes the youth staff will start or join in the game for a little while - its all part of building good relationships.


Belle Cooledge Library  Belle Cooledge Park
"...Sacramento Public Library only loans ping pong paddles, and these from one branch. One of our City Council members donated them because there’s a table in the park adjacent to the library. So far that seems to be working successfully.  " (paddles are loaned about 52 times a year)

New York Public Library
Shape Up NYC : NYC Parks is a NYC Parks program that offers exercise classes.  Currently it is held in several of  the Queens Public Library  Branches

This is by far the most common library-parks partnership. It already occurs for thousands of libraries and nearby parks around the world. 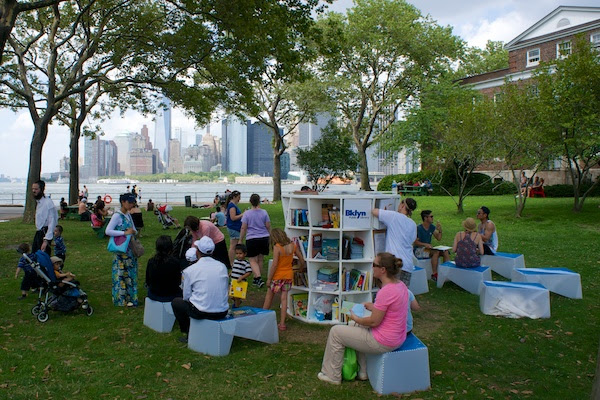 For the second year in a row, the Uni Project partnered with the Brooklyn Public Library, the Queens Library, and the New York Public Library to offer an open-air reading room on Governors Island. Known as Library Lawn, this library offered grass, shade, and stunning views of New York Harbor. The Uni Project provided the reading room infrastructure, while the three libraries provided staff and books. Visitors borrowed books for use on the island, registered for library cards, signed up for summer reading, and explored what’s happening in each of the three New York City public library systems. The BPL also hosted a series of Saturday programs that included storytelling, performances, and music workshops.   link 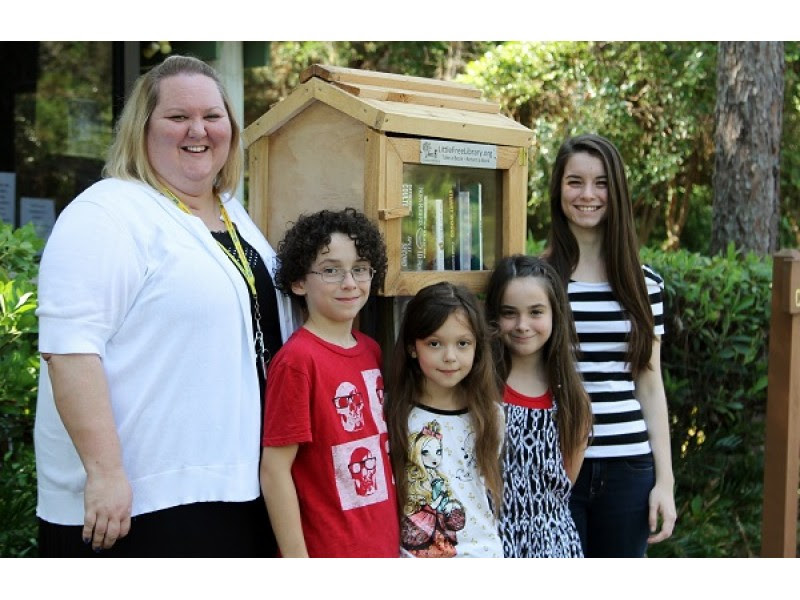 Avid readers on the hunt for new titles may only need to visit a Pasco County park for new literary direction.

The county has officially kicked off a Little Free Libraries program courtesy of a collaboration between the parks and recreation department and the library system. The libraries are weatherproof bookshelf enclosures that are able to house dozens of books for anyone to borrow, a media release on the program’s launch stated....

We are pleased to join Pasco County Parks in this national literacy movement that encourages the sharing of books and stories,” Nancy Fredericks, a member of the county’s library leadership team, stated. The hope is to expand Little Free Libraries throughout Pasco.

On December 18, 2012, Danville Public Library in Southside Virginia opened the first Little Free Library along Danville Parks and Recreation’s Riverwalk trail system, highlighting collaboration between the city’s recreation and library departments. By February of 2013, nine other units were slated to open, with the majority located within parks and along the paved walking trail.

Library Director Shelly Janosko echoes Sgrinia’s sentiments. “The library is incredibly excited about the opportunity to share this Little Free Library project with the City of Danville,” says Janosko. “It’s a great feeling to know that we can promote the importance of literacy, share our love of reading, and carry out such a sense of community with this single project.

In Danville, each of the 10 units have been adopted by agencies such as the Kiwanis Club, the Historical Society, and Epiphany School. Each adopting agency has vowed to maintain the collections in the library as well as the upkeep of the Little Free Library itself. Parks maintenance will install all of the units in their various locations, while the library will stock each box with its initial collection.   link 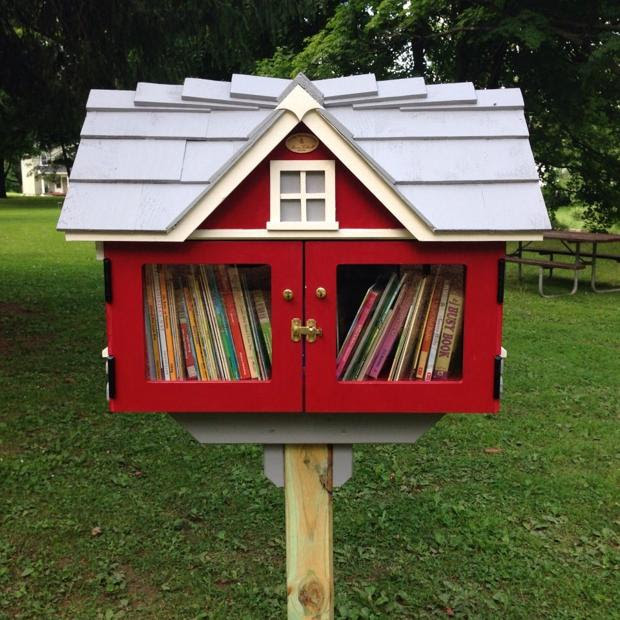 I talked with Robin Bolewski of the Marcellus Free Library and she said something to the effect that when she first broached the idea of a Little Free Library in the town  park, the parks dept said “No Way”. The library director then brought the idea to “their boss”, the town council who said great idea, lets do it. It has become such a success that the towns library and park are now working on other cooperative projects to benefit the community.

staff at all levels of the new organization will be working much more collaboratively. Opportunities are being identified across the divisions (Library, Recreation, and Senior/Neighborhood Services) to identify better ways to serve the public with the resources currently available. One example of improved service includes better access to recreation facilities and classes through coordination by staff at library facilities. Another example is sharing of expertise from one division to another, such as children’s programming.  link


Many  of these examples  are "implicit " they just happen, If libraries and nearby parks actually start  talking to each other, and have meeting where staffers (and the public too)  start asking the question  "How can parks and libraries  work together to better serve our communities physical literacy and reading literacy needs" I suspect they will find new and wonderful ways to work together, and the community will  start to get enhanced recreational opportunities that occur from these partnerships.