In the movie 50 First Dates,  Lucy suffered from anterograde amnesia, she forgot what she did the previous day,she had no long term memory.  Fixed parks are like that, you can bring equipment  to use in them, but the next day  these parks  start with a clean slate and you gotta bring the equipment again.

The Loose Park, a Park with a Memory
Unlike Lucy's brain , a functional  memory system will add new memories over time. Public Libraries act as " memory systems" for communities.  By making  "libraries" of recreation equipment  available in or near "Parks", these "parks with a memory"  will   be able to learn  the recreation needs of community members.

The concept of involvement and participation
underlies this whole report. It seems central to the
comments of all our consultants. Rand has
summarized the point when he says, "Designed
environments which are thought out. formalized,
and complete are usually lifeless' and
unapproachable because (a) they do not invite
interaction and modification to suit immediate
human needs; (b) they are unable to grow, develop
and become extended through human use. Human
habitation merely fulfills (for better or far worse)
the designer's conception of their potential
meaning rather than leading to the discovery
of new functions and new forms of interaction."
New York, New York 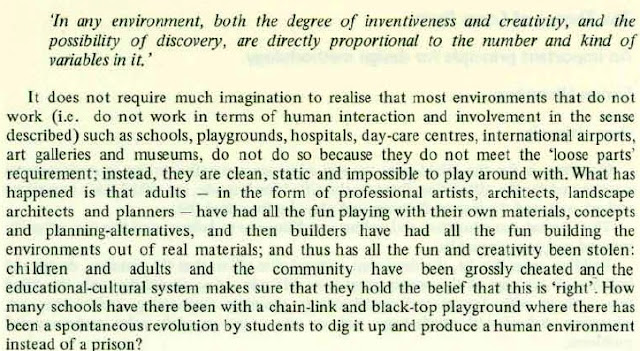 How NOT to Cheat Children  The Theory of Loose Parts, Simon Nicholson

Since 1961 it has learned something new  a total of 2 times.

At this fixed park, learning  happens over decades.


Several blocks away from where I live  is a Branch Library.

Other then a few books in its historic collection, I suspect that there are no books at this branch that go back to 1961.This is because of -the periodic  purchase of new   equipment (books etc)
-interbranch lending, where new "equipment" is added on a daily basis.

At this Loose Park, learning occurs on a daily basis.