I brought a flyer to point out the problems  of many parks that were  designed in the 20th century . in meeting community recreation needs. Her's what the flyer said...


Philadelphia has the largest in-city park system in the world, which can serve as a tremendous resource for social interaction, relaxation and recreation. Yet 72% of older Philadelphians report they had not gone to a public recreation facility in the past year. 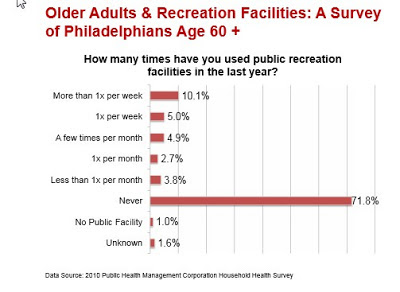 Philadelphia's findings are  not an aberration. A Rand Corporation study found that seniors seldom use Los Angeles  parks.link

Why are seniors not using parks? One possibility comes from the authors of the book People Places they said   "The natural environment of a park is not enough to attract some elderly users, but a park with many activities can simulate social exchange and provide a sense of belonging"   link
I was talking to a senior who uses a wheelchair, she asked me if I could let her know if there were any inclusive playgrounds  in NYC. I asked her to define inclusive playground . She said a park that would have activities for her to participate in. Turns out there are not many parks in NYC  that are inclusive for her.

Seniors are not the only groups with issues that cause them not to use parks...
..a research team studied 20 parks. The "main surprise was that the majority were highly underused," says Moore. One park never saw a single user... The team found that the parks with the most activity had new or recently renovated playgrounds that offered diverse choices for play, including climbing structures, swings, water play and sand play. These parks also included relatively new settings with comfortable seating that fostered a social environment for adults—which prolonged park visits. "

I was visiting Manhattan's Union Square Park , I talked to a youth there who told me, “there's benches for seniors  and a playground for the little kids but nothing for us.”


Overall this is a great facility I just wish the community would use it for more activities other than the one concert in the park they have every summer because that's pretty much the only reason why I've ever gone here.  link


Contemporary American playgrounds don’t hold or inspire older kids...More and more, preteens avoid the playground altogether, choosing instead to spend time indoors, most likely sitting in front of some kind of screen...What teen will go to the playground to play a game when he has better graphics at home on his computer or anywhere on his cell phone? The Science of Play

At the 20th Street Scoping meeting  meeting most of the people were older and they asked for a park to be built to their specifications. as Chelsea Now reported...
...each group presented their top picks to the room, with front-runners ranging from classic choices such as playgrounds and quiet green space, to more out-there options including an educational garden and a mural. The majority of those in attendance also favored ample seating — for lunch breaks and friendly neighbor chatter — and some type of water feature. Almost everyone opposed a comfort station, which would take up a good chunk of the small space.

But as the article in Chelsea Now   also said  there was an exception...
Sixteen-year-old D’En Vargas suggested a multi-use basketball court to his group — an idea that wasn’t so warmly received.

“Without that, a lot of teens won’t come — they go to the park to play sports. It would be uniting us with everybody else,” said Vargas, who lives in Queens but spends a lot of time at his grandmother’s in Chelsea. 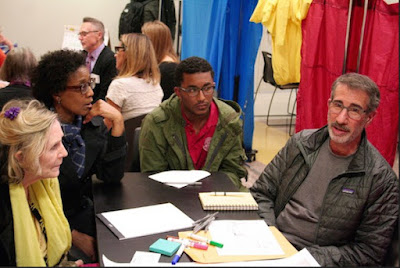 The debates were spirited — and not always satisfactory for everyone. D’en Vargas, 16, second from right, encountered staunch resistance against his idea for a multi-use sports field on the small plot. Photo by Yannic Rack.

“This is more of an older group, so my opinion is currently being shot down,” he confided later. “But I’m still fighting for it.”

Other then D’en Vargas there was nobody in his age group to fight for a park with features for  youth, so the older attendees overwhelmed his wishes. They created the park they wanted without concern for the needs of his age group. No one with disabilities was there to speak for their needs either.

This is not the first time in parks designs that I have seen that the special interest groups that show up are given a disproportionate voice to those that did not show up. 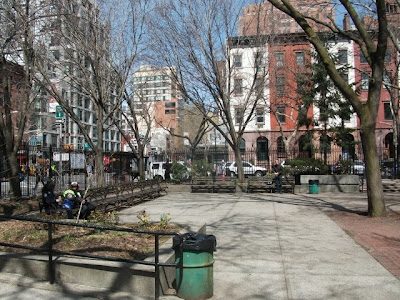 This is Chelsea's Clement Clark Moore Park, it has a great playground for kids and is well used by them , but nothing but benches and greenery to look at for teens, adults, seniors and special needs folks (other then kids)  .  Not a lot of people in these groups are seen using this park. An article on the  recent million dollar redesign has as far as I know show that  nothing is being done for these  for these groups.

So how do you assure that parks can meets everyones needs,


Involvement and Participation
The concept of involvement and participation
underlies this whole report. It seems central to the
comments of all our consultants. Rand has
summarized the point when he says, "Designed
environments which are thought out. formalized,
and complete are usually lifeless' and
unapproachable because (a) they do not invite
interaction and modification to suit immediate
human needs; (b) they are unable to grow, develop
and become extended through human use. Human
habitation merely fulfills (for better or far worse)
the designer's conception of their potential
meaning rather than leading to the discovery
of new functions and new forms of interaction.
Oddly enough [he goes on to say] many environ-
sents which 'work' well for people meet few
if any, aesthetic criteria ordinarily employed

by designers." From New York, New York (1968)
by Lawrence Halpern and Associates.


Simon Nicholoson who wrote How not to cheat children The Theory of Loose Parts.


‘In any environment, both the degree of inventiveness and creativity, and the possibility of discovery, are directly proportional to the number and kind of variables in it.’


"In 1972, architect Simon Nicholson developed the Theory of Loose Parts; the idea that loose parts, materials which can be moved around, designed and redesigned, and tinkered with; create infinitely more opportunities for creative engagement than static materials and environments. Basically, the more materials there are the more people can interact.

Think about a gallery or a museum, which exhibits are you more drawn to: the paintings on blank walls or the interactive pieces? While the paintings are undoubtedly beautiful or invoking in some way, it is always the interactive exhibitions, the ones which I can engage with physically which draw my attention, inviting me to come and experiment". link

There are several really great park in my neighborhood that follows these principals, only they  wasn't designed by the parks department-they are our branch libraries 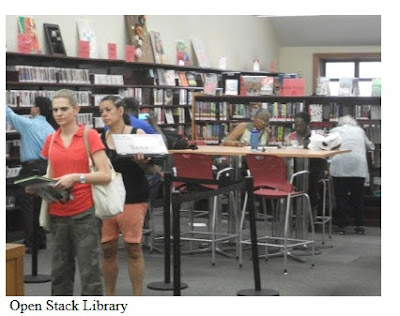 At the libraries  there are thousands of Loose Parts that can meet the widest range of recreation needs. And if they don't have an item you want you can request it from another branch. Our libraries serve all age groups and abilities, our parks don't. Libraries can change their offerings  to meet changing needs, parks cant.  Libraries can do this because they are designed to offer Loose Parts, our parks are not. designed that  way.


The loose parts design   of our  libraries allows them to grow to meet community needs over time to serve all ages and abilities , The fixed parts  design of our  parks mean that most groups do not get what they want out of our parks and as the quotes above show  do not use them.

So how to create Loose Parks?


Creating  Have it Your way Loose Parks
Idea #1:
A Park house on site to lend recreation equipment so as to allow area residents to request the recreation equipment they want over time and  create an inclusive park that can   meet the needs of all in the community no matter what their  ages and abilities

This is the parkhouse at Rockefeller Park a NYS park in Battery Park City. Parkgoers can go up to its window and borrow active and activities recreation equipment for all  ages and many  abilities 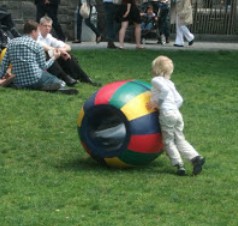 Here are some ideas as to equipment that can be offered, unlike fixed equipment which cannot be added to  this list can be added to at any time

by going this route we will be creating the first park in Chelsea that can actually meet the needs of all people with disabilities too. 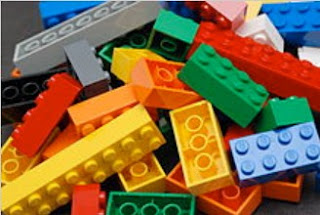 Lego is used by people  with Autism,  Downs Syndrome , and other special needs. 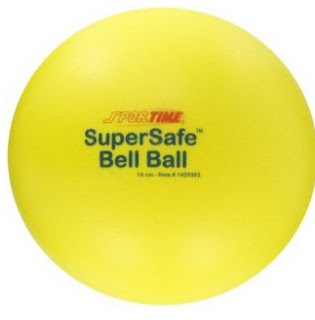 Audible ball(above)  for the visually impaired

A half basketball court would be great. Balls could be borrowed from the parkhouse. The court could be for kids play till 1 pm , and for basketball later in the day.  Even if you can not get a basketball court, with a parkhouse  you can still offer other items to bring teens to the park. for instance a  virtual reality basketball trainer 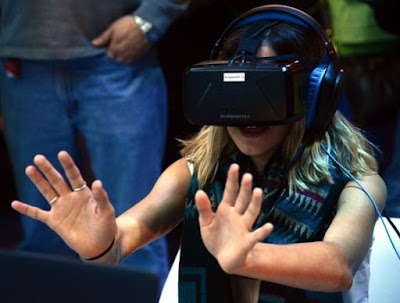 
Idea #2
If a staffed parkhouse on site  is not feasible,  partner the 20th street park with the Andrew Heiskill library at 40  West 20th street. 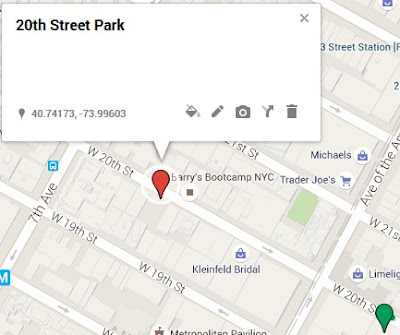 
“Our Library checks out basketballs to be used on the courts near the library.  We also have frisbees, jump ropes and hacky sacks available to borrow. The balls have been replaced many times through the years and have resulted in much good will with the kids after school. When they (the kids!) start bouncing off the walls, we suggest they bounce a basketball instead. .”  Maine Library

-I talked to a branch manager of a rather small Carnegie Library about lending recreation equipment. She said to me something to the effect  "look at this place, we have no room".  Last week I came back to her and said, "What if you didn't have to lend the items, just keys to lockers holding the items". Her reply was "This we have room for" 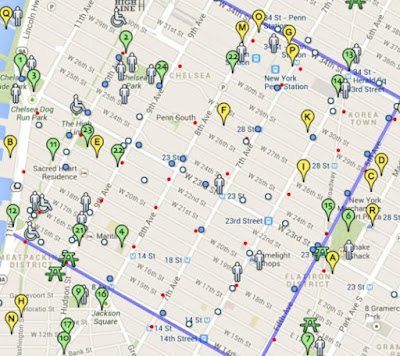 There are approximately 20 parks department parks and playgrounds (green) shown in this view of  Chelsea  and surrounding areas  . By opening a central Locker key lending location in either a Parkls Department park, Chelsea Recreation Center  or at the Muhlenberg library(centrally located at 23rd and 7th, has unused space ) , all of Chelseas parks would now become have it Your way-Loose Parks, with a few staffers covering equipment lending for nearly 20 parks. .

Prior to implementing at 20th street, here are a number of locations that this concept can easily be tested at:

Columbus Branch Library -PS 111
On Saturday I was in Hells Kitchen. I noticed a Schoolyard into Playground was on 52nd and 10th. at PS 111 Only about 4 people were using the park. It had 2 concrete ping pong tables that nobody was using. I saw a fellow playing with his kid, and asked him if he saw people using the tables. He said almost never. . By having Columbus Library on 51st and 10th lend ping pong paddles and other recreation equipment (and/or  keys to lockers in the park  holding paddles/recreation  equipment)    it would help activate this  fixed equipment park. 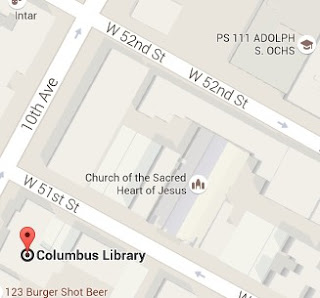 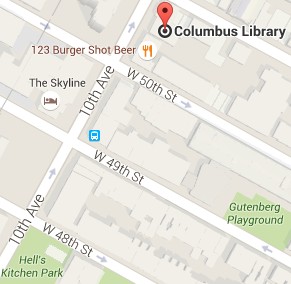 Doing this will  also have the side effect of immediately creating Hells Kitchen's first inclusive parks, for all ages and abilities. And by testing at Columbus Library and its   3 nearby parks  it will also show how a single branch library can become the community hub of recreation equipment lending for multiple nearby parks. 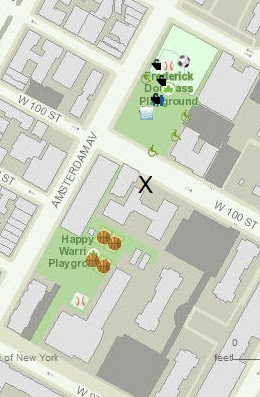 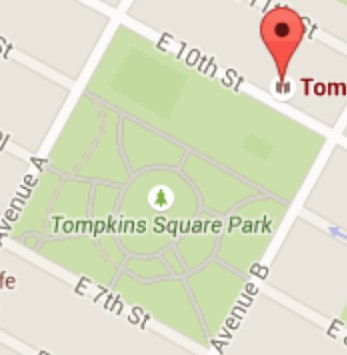 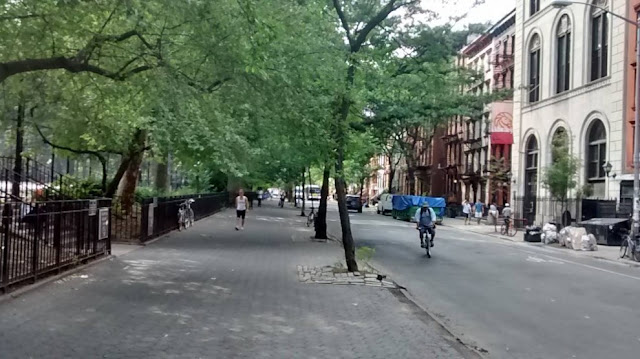 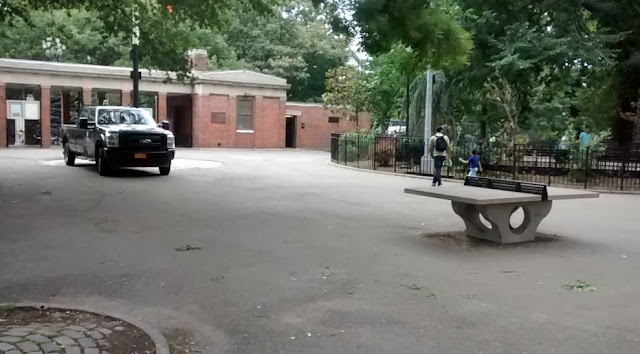 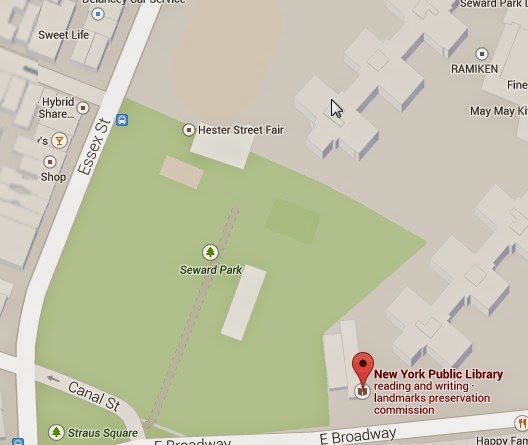 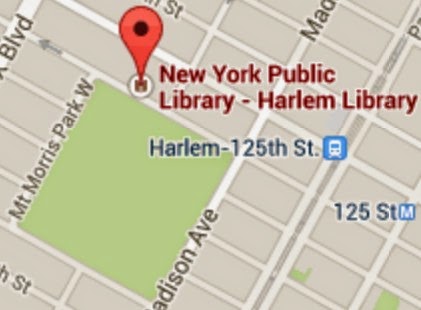 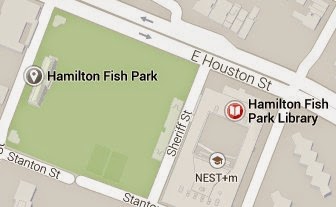 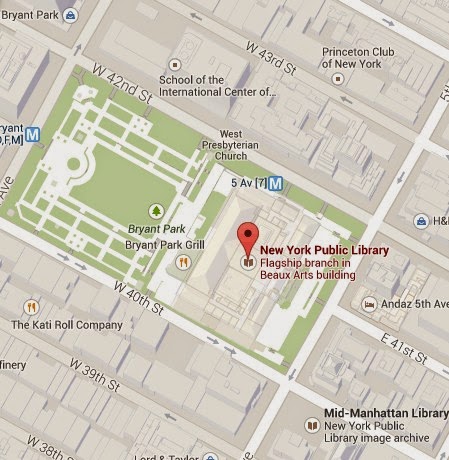 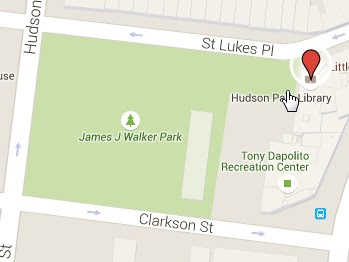 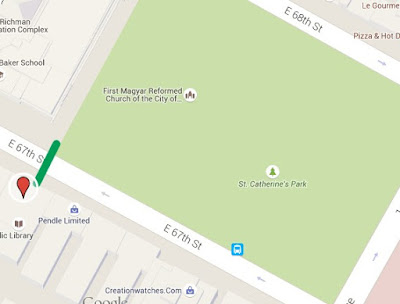 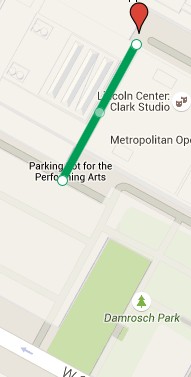