Mom, Dad, This Playground’s for You 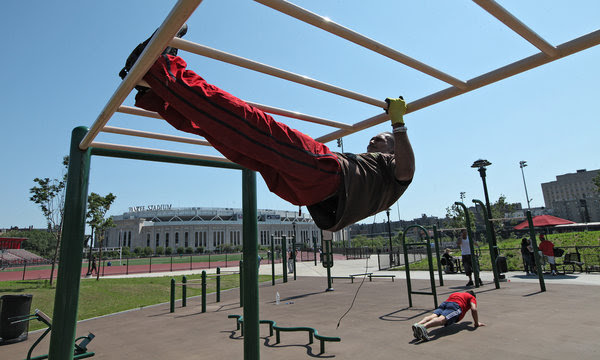 ...New York City is testing its first such playground in Macombs Dam Park in the Bronx, and plans to bring as many as two dozen more to neighborhoods across the five boroughs in the next 18 months, park officials said.
The goal is to lure people off their couches and into the outdoors with specially designed playground equipment — in grown-up shades like forest green and beige — that recall the joy of childhood play while tightening up flabby abs, thighs and triceps.
Though there are no swings or slides — these are essentially outdoor gyms — such playgrounds not only have the look of traditional children’s play spaces, but they are also built in some cases by the same manufacturers.
The adult playground concept is borrowed from China and parts of Europe, where outdoor fitness areas for adults have become as routine as high-fiber diets or vitamin D supplements in preventive care, particularly for older people.