Posted on April 20, 2013 by Christine Berthet
We received wonderful pictures and note from Richard Kent Green: 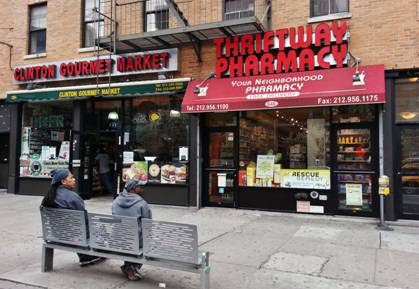 “Attached and below, please find photos of the benches on 10th Ave, between 45th and 46th Streets, which, as you see, are constantly being enjoyed when the weather’s nice . There’s a serendipitous nature to the placement…one 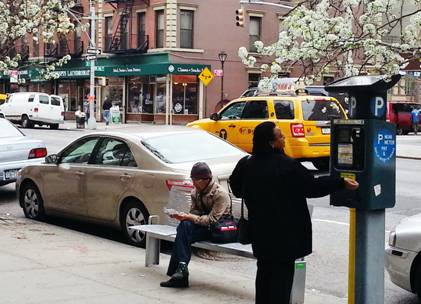 is on the sidewalk in front of the Ryan Clinic, the other is in front of the Thriftway Pharmacy across the street. One can wait for a family member in the fresh air outside the clinic, then wait across the avenue, in the sun, for them to get their prescription filled at the drug store! (or the laundry is drying at the laundromat.”
This past winter, Martin Treat, Chair of Chekpeds, undertook to identify potential locations for benches , at the urge of Bob Arnold of Chelsea who identified their added benefits for seniors who want to remain active.

Thank You Richard for the feedback, and Bob and Martin for the initiative.
To order a bench on your block please Click Here to use our new visual tool. They are particularly well suited to bus stops which do not have a shelter. 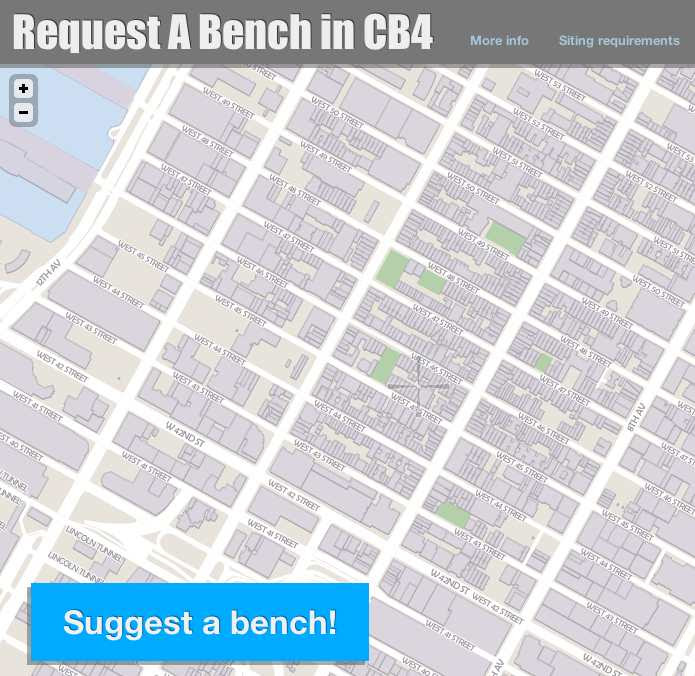 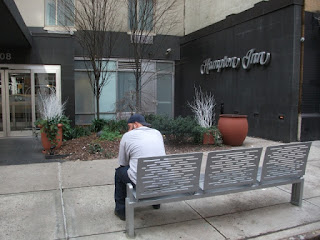 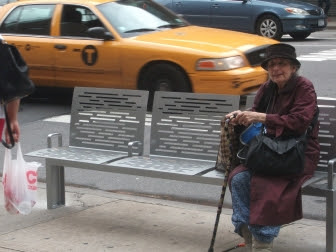 
View ParkChelsea-Planned and Suggested Recreation Sites in a larger map

Between Walking and Wandering, Power in Presence

Walking and wandering are two very different things. Walking is functional; it is merely the act of getting from A to B on our own two legs. But when we wander, it is the journey–not the destination–that matters. Somewhere between these two, there has to be a happy medium. In many of today’s sprawling cities, traveling on foot can be difficult, if not impossible. Even when sidewalks and crosswalks are available, many suburban and urban landscapes are so debased that they provide little inspiration for wandering. To get lost on foot in Paris is a pastime; in Phoenix, it’s a headache.

Park Chelsea's Wandering Trails-Hike it Your Way
"Several decades ago, when William H. (Holly) Whyte was doing his "street life" research and observing people walking in cities, he concluded that people will walk many blocks if the walk is interesting”
As part of its effort to facilitate interesting walks Park Chelsea is  introducing “Hike it your way” wandering trails. Pick a start and end point,  then create your own unique trail between them. By including sidestreets that you would never normally transverse you'll create a  journey of discovery through the hood.  “Hike it your way” allows you to create a different experience on each walk.
Posted by . at 1:48 PM

Getting to the 3 Minute Park

Many years ago in the book A Pattern language by Christopher Alexander the idea was presented that for people to use a park on a daily basis it had to be within a 3 minute walk. 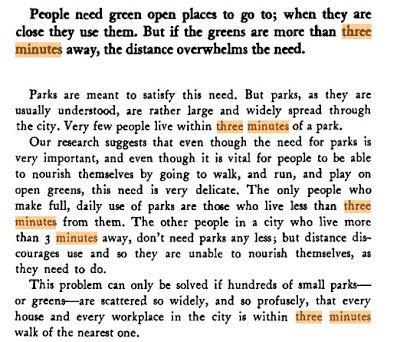 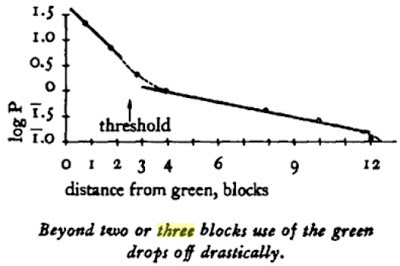 
He goes on to say that these parks should be 60,000 SF at 1500 foot intervals. Now there is no way  that this can be done in today's Manhattan. Curious thing is that this was what we had in the Manhattan of yesterday( and will again occur in the Manhattan once again sometime after between 2018 and  2035.)

Alexander's findings have been corroborated by William H Whyte
Location—How far will people walk to urban parks? “The effective market radius is about three blocks”.  link

- .  In the days before our streets were usurped by automobiles, they were our parks Broome Street near Baruch Place
In this photograph from 1941 we see children gathering in a parking spot, a pushcart in the parking spot to their immediate right and on the sidewalk chairs where  adults would gather to chat. 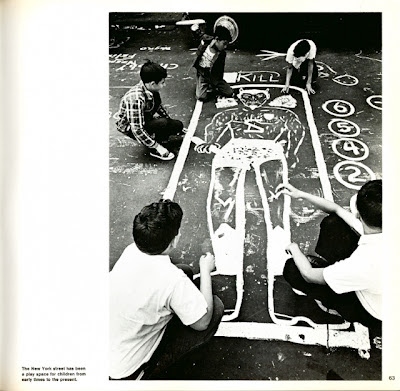 "The New York street has been a play space to children from early times to the present."
From New York, New York by Lawrence Halprin (1968) 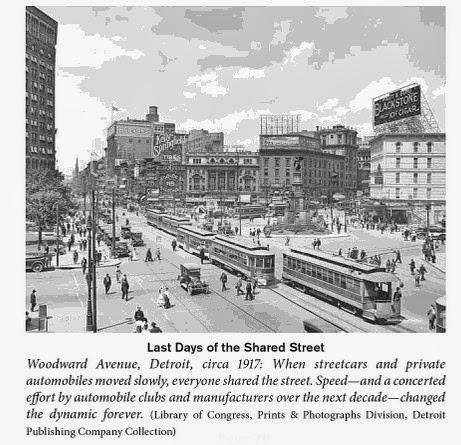 "For Most of History, city streets were for everyone. the road was a market,
a playground, a park, and yes a throughfare,"   The Happy City (p69-70)

Dual use of city  streets as play spaces and for transportation continued until sometime in the 20th century, when the automobile industry finally won its decades long battle to to claim our streets for the exclusive use of automobiles, with humans usage of streets being relegated to use of crosswalk only . Our high speed automobile dominated streets have resulted in "over 15,000 pedestrians and cyclists were injured in New York City traffic in 2012, and 155 were killed",.  Link  It is with good reason that we "Zebras" have ceded our streets to the "Lions" and "Hyenas"


Today
Over the past few years new concepts in public space have  started  to appear...

The NYC Citybench program intends to install 1500 benches throughout the city. 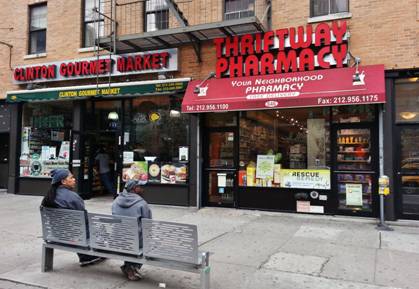 In Hell's Kitchen (above) and Chelsea (below) adding a bench at curbside, transforms a sidewalk normally used for circulation, into a "sidewalk park". These benches cost $2,000 each.  Building new centralized parks is expensive. A  New York Post article showed the cost of building some parks, the lowest cost was $3.8 million. . Just the  renovation of Matthews Palmer playground in Hell's Kitchen will cost $1.8 million dollars.   For $200,000, a neighborhood can have 100 decentralized sidewalk parks , scattered throughout the community meeting a good part of the goal of a "park" within 3 minutes walking distance. 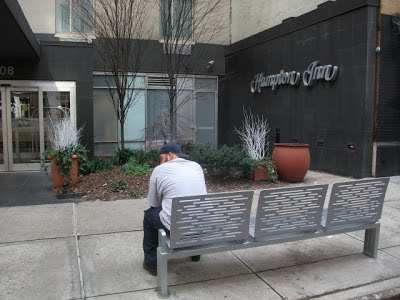 The Hanptons Inn Sidewalk park on West 24th St off 6th ave, offers a quiet spot with a garden view


Sidewalk park benches are great but they do have limitations. There is no table or moveable seating in a sidewalk bench. The concept of the Parklet, a  small park placed in the roadbed and replacing several car parking spots helps get around this limitation while creating the 3 Minute Park, 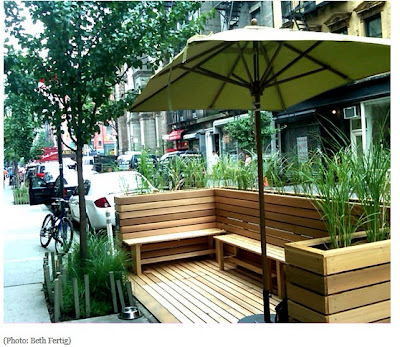 This Pop Up cafe on Sullivan St   has no purchase necessary. 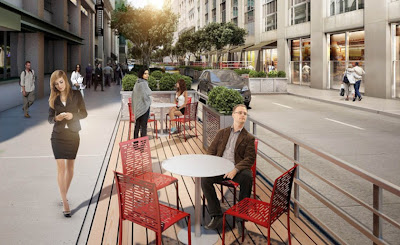 Boulevard 41 between 5th and 6th avenues. Over 30 parklets will be placed on this block

Through a combination of existing centralized parks, plazas, and privately owned public spaces  along with newfangled  sidewalk park benches and  parklets the goal of a 3 minute park can be achieved not by 2030, but in the near future. 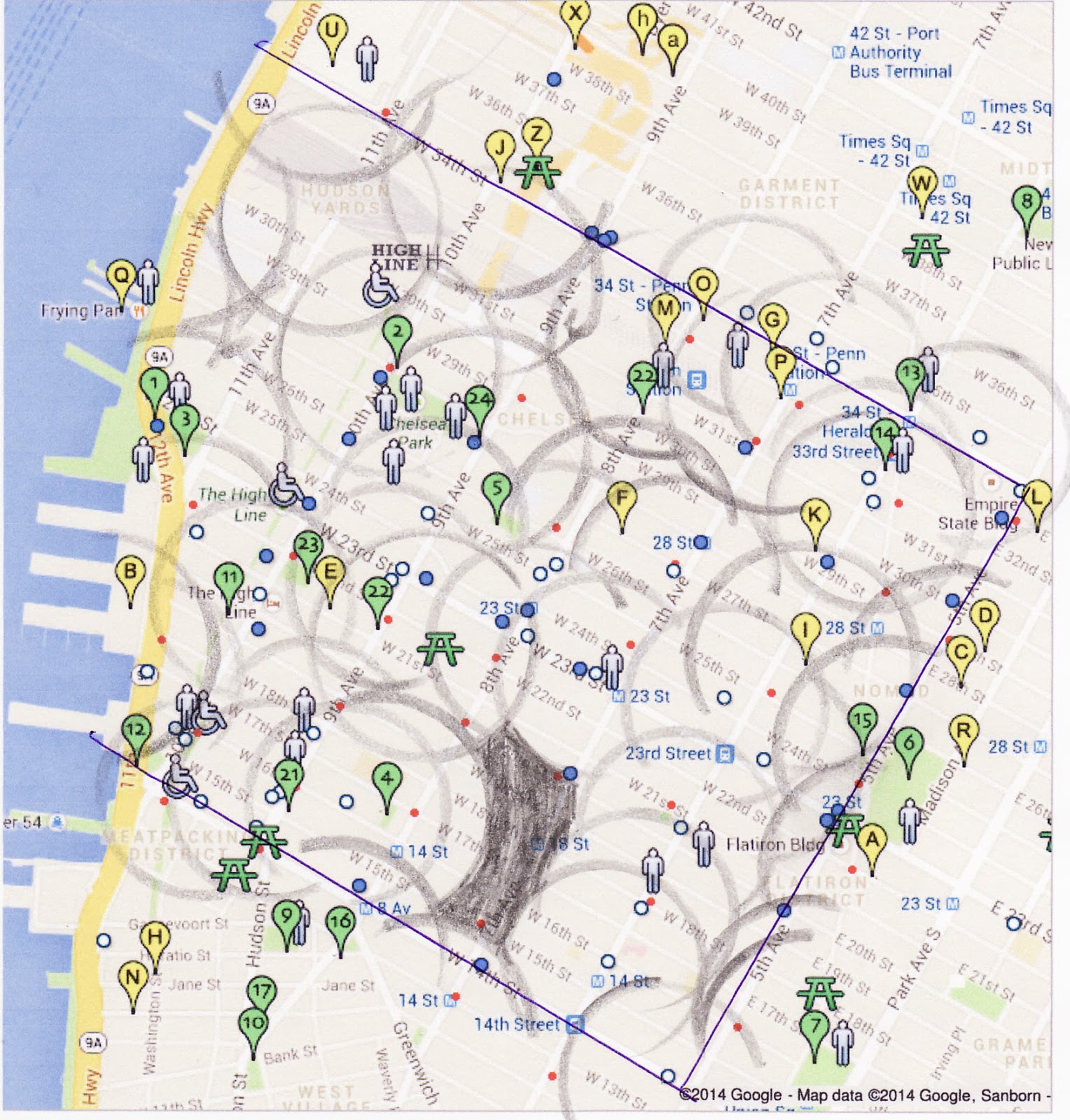 This map shows all the Public outdoor Passive recreation seating locations in Chelsea. It shows that Chelsea now (or will soon)  offer a place to sit outdoors within  a 3 minute walk of all Chelsea residents with the exception of the small shaded area in south east Chelsea. link

get up to 90% of current vehicles off our streets

If these new cars meet their promise, then the future of our parks will be like our  past where our streets will once again be safe they to play in again freeing them  to one again be our parks just like the old days.

NYC's Play streets program is a harbinger of a future where  most NYC side streets will once again be safe enough for our streets to once again become our parks and playgrounds.

I was on 22nd st and 5th when I saw a bunch of people in orange vests that were walking people who were texting across the block. 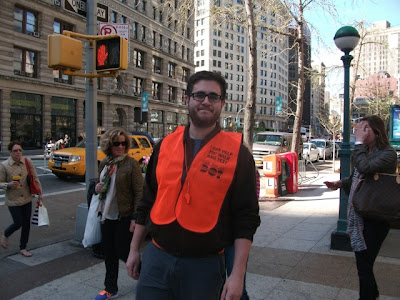 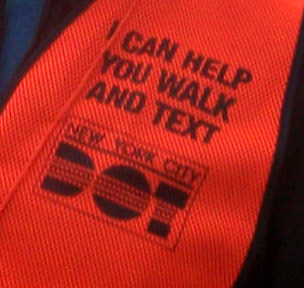 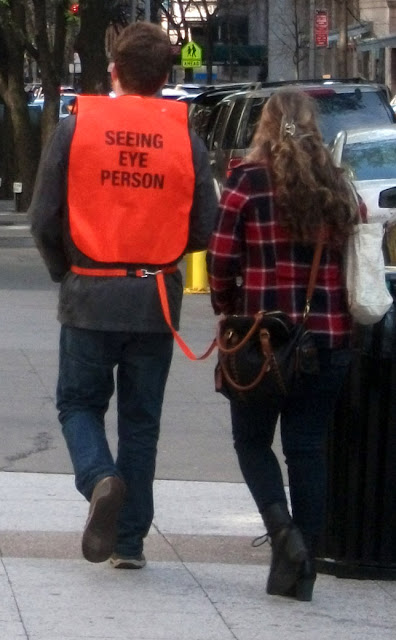 I talked to a leader of the group who said NYC DOT was doing this to make people aware of walking and texting. I suggested they celebrating April Fools day a bit late this year.

I suspect they were members of Improv Everywhere who did this Chelsea Best Buys gag several years ago...

Posted on April 23, 2006 by Charlie
DV Cams: Agents Shafer, EMartin, Reeves, Carlson
Digital Photography: Agents Nicholson, Todd
Mission Inspired By: Agent Slavinsky
The idea for this mission was submitted by a stranger via email. Agent Slavinsky wrote in to suggest I get either a large group of people in blue polo shirts and khakis to enter a Best Buy or a group in red polo shirts and khakis to enter a Target. Wearing clothing almost identical to the store’s uniform, the agents would not claim to work at the store but would be friendly and helpful if anyone had a question. There aren’t any Targets in Manhattan, so I decided to go with the two-story Best Buy on 23rd Street. 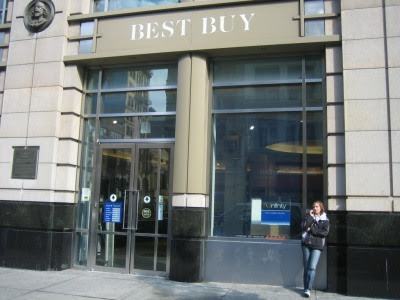 I staked out the Best Buy a few times leading up to the mission. I wanted to figure out the exact shade of blue they used for their uniforms. One detail I noticed is that all employees wore belts and black shoes. I figured it would be against policy to film in the store, so any cameras we used would have to be somewhat hidden. In addition cameras could also be “hidden” in plain sight by using Best Buy’s demo cameras to document the mission. All we would have to do is bring in blank tapes and memory cards to insert in their own video and still cameras.

The only drawback is the never-ending stream of kids who want to pet him.
OK, so this isn't a real thing, but it should be. In actuality it's (probably, but unconfirmed) part of an upcoming Improv Everywhere stunt that may or may not be published next week. But, this photo is making the rounds today because, let's be honest, we'd all feel a lot safer on the sidewalks if Seeing Eye Persons were a real thing for people who are handicapped by their phone addictions...
link

STREET FAIRS AND PARADES: MAY 2013

300 W Block Association Stoop Sale May 4th 22nd st 7th to 10th Avenue (rain date May 5th)
To participate, you must be a resident : set up a table or use your building stoop & sell books, toys, clothes & small items. Please make a contribution from your profit to your Block Association. No food or large furniture.  This is a community event - NO COMMERCIAL VENDORS ARE PERMITTED TO SET UP.
300westblockassoc@prodigy.net


**Please note, that all dates are pending NYC Mayor’s Office permit approval and are subject to change**

For street events in other areas of Manhattan click here

Located on West 25th Street between Broadway and 6th Avenue and open 9AM – 5PM, every Saturday & Sunday all year long (weather pending), the West 25th Street Market features up to 125 vendors selling antiques, collectibles, and other types of vintage and mid-century modern items.

PS11 Farm Market
The PS11 Farm Market has been in operation since June 2008 and operates Wednesday mornings from 8am to 10am in front of PS11, 320 West 21st Street from mid-June through late November. 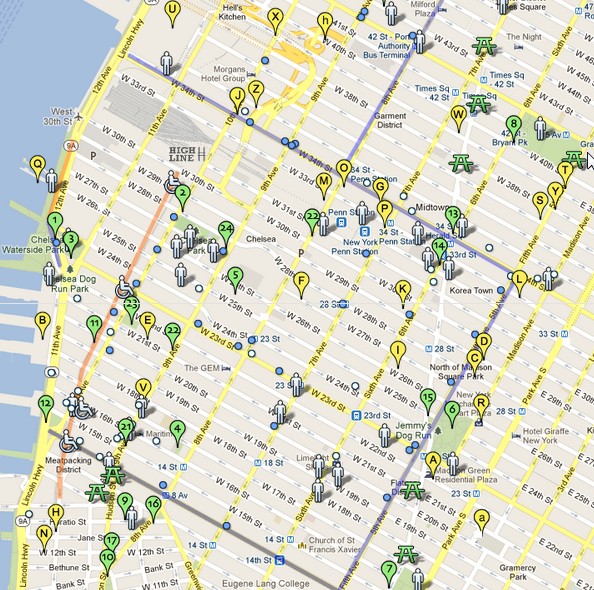