Philadelphia – Commissioner of Parks & Recreation Kathryn Ott Lovell, Councilwoman Cindy Bass and Jane Golden, Executive Director of the Mural Arts Program, participated in a ribbon-cutting ceremony to celebrate recent improvements to Wister Playground in the Germantown section this morning.
“The renovations here at Wister have truly brought this park and this neighborhood to life,” said Commissioner Ott Lovell. “I’m so glad that we were able to provide the residents and visitors of Germantown the high-quality park they deserve.”
The improvements to Wister playground include new fencing, play structures, site furniture, spray equipment and safety surfacing. It will also  serve more people as an inclusive playground, thanks to the incorporation of an ADA-compliant swing.
“I remember what the old Wister looked like,” said Councilwoman Bass. “Now we see what’s here, and I’m just so proud to have been a part of it. We know that we couldn’t have gotten this work done without both Mural Arts and Parks and Recreation.”
The renovations included a mural designed by artist Willis Humphrey with mosaic work by Jonny Buss. The mural was completed by the Guild Program, a program for inmates that provides employment and job training, based on Restorative Justice principles of giving back to the community while learning new skills, funded by the Philadelphia Prison System.
“We are always delighted to partner with the Philadelphia Parks and Recreation department,” said Golden. “Working at Wister Recreation Center has been a wonderful experience; not only have we brought art and beauty to a recreation center, but the people doing the work—members of our Guild re-entry program—have been profoundly changed by the work as well.”
In addition to reviving the outdated play and spray area with state of the art equipment, Wister Playground also received new lighting at the existing football field and enlarged and resurfaced basketball courts.

Several years ago, the NYC Health Department received a grant to run a program called  Make NYC Your Gym

I thought it was a great idea, unfortunately it was a limited time campaign and had  a Limited time effect.

-be persistant
using permant media instead of short term media

Be used as a way to coordinate NYC's various public recreation offerings
Posted by . at 9:30 PM


You don't need full time staff to get programs going in a park.  Party timers will work just as well.

Microsoft Hololens images  have issues in direct sunlight the holograms become translucent In shade the author of this video says they work well.

kids can skateboard on a flat surface, but adding ramps and other features makes skateboarding far more interesting. MR can be done in an barren open space, but I would think by adding physical reality  objects to the space it can become more interesting.

Tzuum is a form of Laser tag. You can play it with just your smartphone, but addiong this makes it mioe interesting. 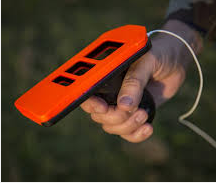 -Some MR apps call for comfortable  social seating and a table. ( just providing a table and seats will not work for everyone. I live down the block from a park with a chess table and ergonomically terrible seating. It may be social seating around a table but this park feature is useless for me.

-MR needs hardware this may be...
- a smartphone
-in some cases a smartphione with special hardware such as a gyroscope
- dedicated MR headset

Not everyone will have these, parks departments can make them available.

This post is not meant to solve all the issues, it's just meant to let park designers know there are issues.

Is it inclusion kinda. is it inclusion of equals no. The neurotypical kids are running, and the person using the wheelchair is included by blowing the whistle.


Mixed ability inclusive play  are those activities where people with special needs and neurotypical people play together as equals.

Mixed ability dance is another one of these activities


NYC parks does  not offer much in the form of recreation activities led by professional staff. So play situations are generally peer play.

In a play situation that is peer organized special needs folks are often marganilized.

-neurotypical kids will get leadership let recreation, which they are not getting currently


-it is far less liklety that neurotypical kids will unwittingily  act not properly to  them, as has occurred at sonme inclusive playgrounds

-Everybody will start making neighborhood  friendships